Khabib Nurmagomedov announced his retirement from MMA after his win over Justin Gaethje at UFC 254 this past weekend. In doing so, he stated that he had promised his mother that this would be his first and only fight without his father. It looks like “The Eagle” is set in his decision, which creates a vacancy at lightweight. In the meantime, Khabib can ride off into the sunset.

Today we will be taking a look at what is next for the rest of the winners at UFC 254.

At UFC 254, Robert Whittaker defeated Jared Cannonier via unanimous decision. Going into the fight, Dana White said that if Cannonier was to win he would get the next crack at the title. He said nothing about what would happen if Whittaker was able to secure the win. Whittaker is 2-0 since losing his title to Isreal Adesanya. The only top contender that makes any sense for Whittaker would be Paulo Costa. Costa will be looking to make a statement coming off his loss to champion, Isreal Adesanya. That said, Dana White noted post-fight that he thinks Adesanya is the fight that makes sense. Which probably means that’s what’s next.

Alexander Volkov was able to stop Walt Harris in the second round via TKO this past weekend. Proving that he is knocking at the door to the top of the division. Volkov has proved that he can deal with the best of the division and should be looking for a fight that will land him in the top three for his next fight. Frankly, he should fight Jairzinho Rozenstruik in his next fight. Francis Ngannou is getting the next shot at the title and Curtis Blaydes has already beat Volkov. So number three ranked Rozenstruik would be the next best option for Volkov at the moment.

Phil Hawes made history at UFC 254 by knocking out Jacob Malkoun just 18 seconds into the first round. Thus becoming the second fastest knockout by a middleweight debutant in UFC history. The pressure from Hawes made him look like a seasoned vet. In his next fight, Hawes should fight Impa Kasanganay. Kasanganay was on the wrong side of a highlight reel knockout just two weeks ago. He should be looking to fight sometime in the first quarter of next year. That should be plenty of time for Hawes to make his return. Although Hawes could be looking to return sooner, Kasanganay would be the perfect next opponent. Both men are up and comers and both men have a good bit of hype surrounding them.

Lauren Murphy defeated Lilya Shakirova via rear-naked choke at UFC 254. Shakirova was filling in on short notice for Cynthia Calvillo. Murphy’s win over unranked Shakirova will likely not affect her rank in the division. With that being said Murphy should be looking to rebook the bout with Calvillo and take one step closer to a title shot.

Magomed Ankalaev finally put an end to the Ankalaev-Cutelaba saga with his first-round knockout of Ion Cutelaba. He is finally able to move on from the fight and make his way upward in the division. Ankalaev has great grappling and showed in both of his fights with Cutelaba that his striking is just as good. Ankalaev should be looking to fight Johnny Walker in his next fight. Walker is a guy with a lot of hype around him and is ranked higher in the division than Ankalaev. Walker also has great flashy striking with an underrated ground game. This seems like it would be the perfect stylistic match-up for both fighters. 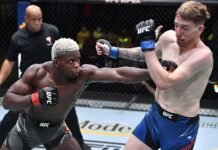