Next week’s Bellator 250 card finally has a co-main event attached.

On Tuesday, Cageside Press confirmed an initial report from The Scrap with Bellator MMA officials, which revealed that Henry Corrales and Brandon Girtz had been booked as the co-feature of the event. The fight will take place in the featherweight division.

Corrales (17-5) is a former King of the Cage featherweight and bantameight champion who first joined Bellator in 2015. After struggling out of the gate against some very high-level opponents in Patricio Freire, Daniel Straus, and Emmanuel Sanchez, “O.K.” Corrales went on a five-fight tear that culminated in his knockout of promotional darling and top prospect Aaron Pico at Bellator 214 last year.

That earned Corrales a shot in the Bellator featherweight grand prix, where he was eliminated by former bantamweight champ Darrion Caldwell. In his last outing, this past January, Corrales lost a second straight bout, to Juan Archuleta.

The formidable Brandon Girtz (16-9) has struggled of late, posting a 2-5 record across his last seven bouts. The Gensis Training Center athlete, who trains in Colorado alongside the likes of Justin Gaethje, will enter Bellator 250 off a loss to Myles “Fury” Jury in his last outing.

Girtz has historically competed as a lightweight. 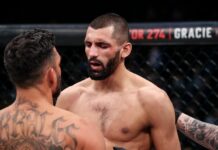