Bellator women’s featherweight champion Cris Cyborg made the first defense of her featherweight title on Thursday at Bellator 249. And the famed striker secured a personal first in the process: the first submission win of her lengthy career.

Cyborg (23-2, 1NC) dominated challenger Arlene Blencowe on the feet, and once the fight got to the ground, she was able to take the back. It wasn’t long before she’d secured the rear-naked choke. It took all of two rounds. Less, really.

Not surprisingly, talk has since turned to what comes next for the fearsome Cyborg, who has held gold in Strikeforce, Invicta FC, the UFC, and Bellator MMA.

“It’s my dream to do a boxing fight. I think I have the opportunity, Scott Coker said maybe he can get one fight for me,” Cyborg said post-fight. “I just have to continue training, continue working. If it’s going to be MMA or boxing, I’m just going to be ready.”

That’s more or less a standard Cyborg answer. The featherweight has rarely turned to calling out opponents (with the exception, perhaps, of seeking a rematch against Amanda Nunes back in the UFC).

The Brazilian has been mentioned as an opponent for Irish boxer Katie Taylor, however. When Taylor’s name was brought up, Cyborg was again non-committal. “I’m going to leave it to my manager and Scott Coker to decide who I’m going to fight next, and if I’m going to fight boxing or MMA. Let’s see,” she stated.

But asked about that fight specifically, Cyborg admitted that “I think it’ll be great. I think it’ll be a great fight. Maybe I can do boxing, and she can do an MMA fight.”

Taylor is a perfect 16-0 in boxing at the moment, and holds multiple titles. She fights again next month.

Of course, one wrinkle in the boxing idea is the lack of fans. And the lack of a gate. Taylor vs. Cyborg might not be Mayweather vs. McGregor, but it would likely draw interest. No gate, less money to go around. Plus, it may be Cyborg’s only chance to pursue a boxing match.

“For sure, to have the fans is better,” Cyborg said Thursday. “Better for them. I love all my fans. It’s nice when you fight with fans [present], too.” 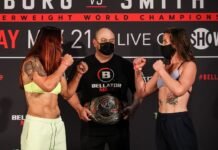 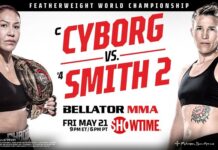