When Brian Ortega returns to the octagon this weekend atop UFC Fight Island 6, he’ll be facing off with one of the most entertaining fighters in the sport’s history: the man best known as The Korean Zombie, Chan Sung Jung.

Out of his eight fights in the UFC, he has walked away with performance bonuses seven times. All of a different variety: knock out of the night, submission of the on the night, fight of the night. It’s one thing to be a fighter that has racked up a lot of bonuses of his career, but to do it in almost every single performance on the biggest stage in the world is special. And The Korean Zombie is definitely special.

Zombie is a performer. When the lights are brightest and the stage is bigger than ever, he executes amazing performances. So expect nothing less this Saturday. With title implications at play, its certain to bring out the absolute best of both men.

Check out our full preview of the UFC Fight Island 6 main event in the video above. 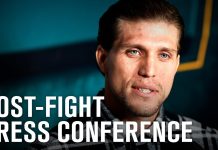