UFC Fight Island 5 sees a number of fighters making significant cuts. Here’s a look at some of the standouts.

Marlon Moraes has never missed weight while he has been in the UFC and he has not changed weight classes since he has been in the UFC. However, it is worth noting that not only is the 32-year-old Moraes built like an absolute tank, but he is not authorized by California State Athletic Commission to cut to 135lbs. Marlon had weighed in at 135.4lbs. ahead of his fight against Aljamain Sterling in late 2017. By the next day, like magic, Moraes had gained more than 14.5% of his total body weight back, entering the cage for his bout at at least 155lbs. CSAC made the decision to no longer license Moraes for bantamweight fights since he had gained back more than 10% of his total body weight prior to the fight, and they won’t in the future either, “without extensive medical documentation from a licensed physician certifying the weight class is appropriate and verified by CSAC physicians.”

Moraes hasn’t fought in California since that fight. Marlon hasn’t missed weight or weighed in at a higher weight class than bantamweight in more than 6 years. And thanks to Moraes’ muscular frame there is plenty of water weight for him to lose while cutting and he, along with his team, seems to have gotten his weight cut down to a precise science. Moraes will be taking on Cory Sandhagen at UFC Fight Island 5 in the bantamweight weight class. 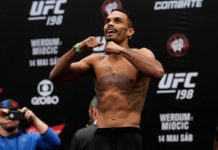 UFC 255’s Joaquin Buckley: “We Will Never Get High Off What We Do”