Bellator Europe 9 marked the third of three events for the promotion in Milan, Italy. And it brought with it a main event a long time in the making when it finally arrived on Saturday. That saw James Gallagher and Cal Ellenor finally face off, after multiple attempts to pair the duo up over the past year plus.

Gallagher entered the fight having won three straight after his upset loss against Ricky Bandejas in 2018. Most recently, he’d got the better of former UFC fighter Roman Salazar. The “StrabAnimal” had developed into one of Bellator’s flashiest stars, and a fourth straight victory could place him near the top of a division that included standouts like Sergio Pettis, Patchy Mix, champ Juan Archuleta, and the recently signed Brett Johns.

Also on the Bellator Europe 9 main card, another SBG Ireland talent, Charlie Ward. After exiting the UFC after going 0-2 in the octagon, Ward had turned things around, putting together a 5-1 run under the Bellator banner.

Opening up the main card, meanwhile, was Kiefer Crosbie, once again fighting at a catchweight. The 160lb affair saw “Big Daddy” paired up with Charlie Leary, who had been trading wins and losses since 2016.

Check below for full results from Bellator Europe 9’s main card, which gets underway at 5PM ET. A live stream of the action is available above. 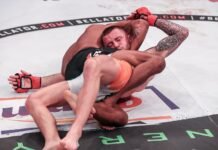