UFC Vegas 11 ended with Colby Covington finishing Tyron Woodley in the fifth and final round due to a rib injury. Woodley confirmed after the fight that he had in fact broken a rib. From that fight down, the card was a good one. Today we will be taking a look at what is next for the losers from Saturday’s big card.

It is not looking good for Tyron Woodley at the moment. After losing to Colby Covington this past weekend, he is currently on a three-fight skid. In each of those three fights, he failed to win even a single round. Woodley is 38 years old and has been fighting professionally for 11 years now. Although it is always a touchy subject, this could be a really good time for Woodley to retire.

If he chooses not to retire it is clear he shouldn’t be fighting in the top five of the division anymore. It would be great to see Woodley fight Robbie Lawler for a second time. Lawler is in a very similar position as Woodley. He is currently on a four-fight losing streak and is also 38 years old. Lawler has been fighting professionally for the past 19 years so it’s also very possible that he is also contemplating retirement. If both men decide that this isn’t the time to retire, it would be great for these guys to run it back.

Donald Cerrone and Niko Price fought their way to a majority draw at UFC Vegas 11. Neither man was satisfied with the result and should be given the opportunity to fight again. Dana White made comments that he thinks it is time for Cerrone to retire, but for what Cerrone has done for the UFC, they should give him at least one more shot. At least.

Gerald Meerschaert was on the wrong end of a vicious first round KO this past Saturday night. His loss to Khamzat Chimaev puts him on a two-fight skid. He is a great talent but he has had somewhat of a rocky career in the UFC. Going 4-6 in ten fights he hasn’t yet found his grove in the middleweight division. Throughout the years Meerschaert has taken fights at both middleweight and light heavyweight. Now might be the perfect time for him to make the permanent move to 205. A canceled bout between him and Ed Herman is one that the UFC would be able to sell to the general public. It would be a extremely technical grappling fight if the fight even got that far.

Ryan Spann had some great moments in his fight with Johnny Waker at UFC Vegas 11. He was able to land a few takedowns but unlamitly ended up getting hit with a few questionable elbows and punches that ended the fight. To this point it is unbelievable that Spann hasn’t been matched up with Paul Craig. Both men are extremely dangerous grapplers on the back half of the top 15. Spann has 11 out of his 18 wins by submission. Craig has 12 of his 13 wins by submission. It’s not often that you get such a technical grappling matchup at 205 so it would be wise for the UFC to act on it now. Or at least if Craig gets past Shogun in their upcoming rematch.

Randa Markos has had somewhat of a disappointing professional career going 10-9-1. That did not change this past weekend as she was submitted by Mackenzie Dern in the first round. This loss pushes her to 6-8-1 in the UFC. If Markos is still with the UFC in her next fight it might be worth it to match her up with Polyana Viana.

Viana is 11-4 but is 2-3 inside the UFC after winning her last fight in August over Emily Whitmire. She is a young, hungry, up and coming fighter that is looking to climb the rankings. A great test for her would be a seasoned vet like Markos.

Darren Stewart lost a split decision to Kevin Holland this past Saturday. In a fight that was considered by most to be the fight of the night. This loss brings Stewart to 5-6-1 in the UFC. He is still 29 years old and is looking to get his rhythm going in the promotion. Impa Kasanganay is a guy who has been looking for a fight just about every weekend. Calling out fighters like Marvin Vettori on social media. With Kasangany being only two years into his pro career, it is likely that the UFC will try to keep him away from the top 15 for the time being. With that being said Stewart looks to be the best opponent for him on paper. Kasanganay would be looking to prove that he is capable of beating seasoned veterans. While Stewart would likely be fighting for his position in the company. These are the components to make a great fight. 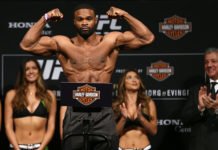