Middleweight Kevin Holland is probably one of the more laid back, jovial fighters you’ll find both before, during, and after fights. So you know darn well that if he says he’s unhappy with his performance, he means it.

Such was the case at UFC Vegas 11. Holland (19-5) picked up a split decision win against Darren Stewart. The “Trail Blazer” wasn’t too happy with his showing, however.

“You’re not truly winning a fight til the ref’s pulling you off. If you ain’t catching a dead body, you ain’t getting it done,” he told media outlets including Cageside Press during the post-fight press conference Saturday. “If that was a five round fight, my cardio was starting to fail, my body was starting to fail, he would have been the winner of the fight.”

A rematch is something Holland mentioned several times on Saturday. How serious is he about a do-over? Asked just that, Holland admitted that yes, he’s “kind of” into it.

“I envisioned myself submitting him,” said Holland. “To be honest with you, in the third round, had he not stuck his f*cking toes in the cage, I probably would have subbed him. It’s like, you were on top, I pulled that kimura, you know it was tight, you stuck your toes in the cage, I told him ‘hey that’s cheating!’ and he said ‘you’re right.'”

“I think he’s a great guy,” Holland added. “If the organization wants me to do a rematch, I’ll do a rematch.”

In the third round, when Stewart turned up the heat and was putting something of a beating on Holland, the British fighter became much more talkative. Constant talking is something Holland is well-known for, and he admits that when Stewart began to jaw at him, “I thought it was awesome.”

“I started laughing. He said something about ‘let’s go!’ and I was thinking in my head ‘motherf*cker I can’t go! If I could go, I’d go! I don’t know what you want me to do. You want me to get up, do a back flip, kick you in the face? This ain’t Mortal Kombat, I can’t do it right now!'” Holland exclaimed with a laugh. “It is what it is. Hat’s off to that man, he had a good third round.”

Kevin Holland was less complimentary when it came to Khamzat Chimaev, however. The pair had a confrontation at the fighter hotel earlier in the week, which led to the Russian-born Swede shoving Holland.

Holland, for his part, believes that Chimaev is “playing a role. What you guys see from me is what you get. What you see from some of these other guys is what you get.” Chimaev, however, “kind of reminds of me a Jon Jones situation. You want to be this, you want to be that, then when sh*t hits the fan, we find out who they truly are. Give it a couple years, you’ll find out who that guy really is. He damn sure ain’t Khabib.”

While Holland appeared to take it all in stride, he added that “you put your hands on me, and eventually you’re going to have to catch it. I’m professional, so I’m going to be professional as much as I can. Especially, I don’t want to get kicked out and miss my big payday.”

But that said, Holland, referencing Eddie Murphy in Harlem Nights, added “don’t f*ck with me.” 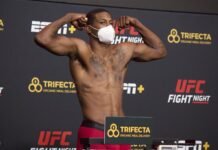