Canada’s TJ Laramie was all set to make his octagon debut on Saturday, just weeks after winning his way into the UFC on Dana White’s Contender Series. The Windsor native was paired up with Darrick Minner, who was supposed to fight a week ago — until what he believes was a stomach bug (initially reported as weight cutting issues) saw him drop off the card.

Minner came out fast against Laramie, landing a right hand before getting into the clinch. Laramie reversed and went for a takedown, and Minner grabbed onto a guillotine. Laramie got the takedown but fell perfectly into the choke. Laramie’s legs were trapped and he had no way to escape! Minner had it in perfectly and he got the tap. For the second straight fight, it was a quick finish. This time by the massive underdog in Darrick Minner.

Heading into the bout, there was lots of talk of the betting lines being a bit too swayed in Laramie’s favor. Laramie is a good prospect but the talk of the lines being wrong ended up being correct, as one of the biggest underdogs on the card in Minner picked up a huge submission victory in the first round. As for Laramie, he’s still a great prospect. But tonight was not his night. 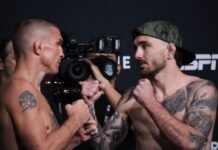 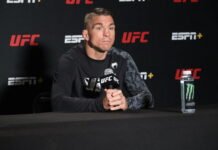