Earlier this year, BJJ standout Mackenzie Dern (8-1) was vocal about wanting quicker turnarounds between fights. Then, the UFC offered her Randa Markos on just a couple of week’s notice.

It was a case of “be careful what you wish for.” Once the adrenaline of her win over Hannah Cifers at UFC on ESPN 9 in May wore off, the strawweight realized that a bit more time would be nice.

“I couldn’t be more happy with having a full camp. Preparing myself, evolving, I felt like I evolved so much in these four months,” she admitted during the UFC Vegas 11 media day. “I started the camp eight weeks ago, so eight weeks training three times a day, really hard, just so focused, I’m really ready for this fight right now.”

Canada’s Markos remains the opponent this time out. The Windsor, Ontario-based fighter is known for her ground game. Dern doesn’t believe they’re on the same level, however. With that in mind, Mackenzie feels she has to worry more about Markos’ “counter attacks, on the standup. I know she’s a grappler, but I think there’s different levels grappling. For sure she’s smart on the ground. But I definitely think, because she’s been in so many fights, she has (sic) good to go all three rounds, she’s got in big fights where she’s getting punched a lot and keeps going forward.”

Distance, reach, and movement are other things that Dern feels she’ll have “the most difficulty” with.

Dern’s only loss as a professional came to Amanda Ribas. That’s a fight she’d like to get back one day — just not yet. “I think eventually yeah, I’d like to face her, but not now. I think me and Amanda will definitely fight at (sic) the belt, I think especially now that the corona, people are fighting so often.” With the coronavirus pandemic creating opportunities to fight more often, Dern feels both herself and Ribas have title potential — and when they do meet again, one or the other will be champion. 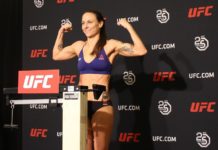 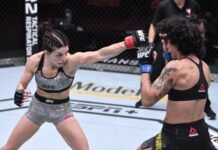