It was certainly not a cakewalk, but Liz Carmouche was successful in her promotional debut Saturday at Bellator 246.

“It felt so good, not only getting back after so long, but getting back and doing it with a new promotion, starting a new chapter, with faces that are smiling,” Carmouche said of returning to the cage after over a year on the sidelines. Speaking at the Bellator 246 post-fight press conference, she noted that there’s at least a few familiar faces in her new home.

Carmouche (14-7), who at times challenged for both the bantamweight and flyweight titles during her UFC run, was up against DeAnna Bennett on Saturday. It was a flyweight bout, or should have been, up until Bennett missed weight. That’s something that didn’t sit too well with Carmouche, who ultimately won via a third-round rear-naked choke.

For fighters that miss weight, she suggested, more than just twenty percent of their purse should be at play — points should be taken. After the 20%, “it should be that every pound after that is a point off the fight,” opined Carmouche. “Because you’re already at a deficit, as the person that took the time to cut the weight, that did all the training, that did everything right. You’re in a deficit, and it’s going to cost you a fight potentially? That’s not fair. So I believe that every pound over should be a point.”

“That would really encourage fighters to make weight every single time, and to be professionals like they’re supposed to,” she added.

Now that she has arrived in Bellator, “The Girl-rilla” would seem to be a lock for a title shot. Although she indicated she’d be happy to take the long road to the title, or fight in a women’s flyweight tournament, an idea Bellator President Scott Coker seems keen on.

But if she should wind up fighting against a good friend in Ilima-Lei Macfarlane, who holds Bellator gold, it won’t be an issue. The pair decided long ago that they’d be willing to fight one another, Carmouche told Cageside Press.

Despite what the pair’s coaches at the time suggested, “we ultimately always said that we were going to face each other, and put on a bigger show against each other than anybody else,” recalled Carmouche. “No matter what, we’re going to throw down, because we know at the end of the night, we can go out to dinner, we can hug each other, we’ll still go home and be friends. This wouldn’t compromise anything.” 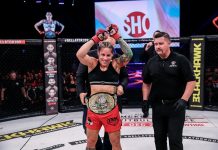 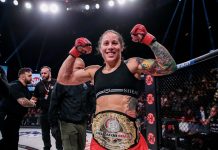 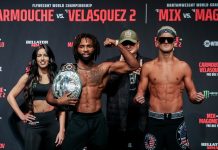