After a couple of tough rounds that saw opponent Patrick Mix use his wrestling to maintain control, Archuleta turned up the heat, utilizing shots to the body and slick movement to take the edge on the feet.

“He gave me all I could handle, and I gave him a lot more than he could handle,” Archuleta (25-2) exclaimed post fight, taking the podium complete with his trademark Spanish conquistador helmet. And a dazzling new belt. “I’m here to stay, I’m here to conquer the 135lb division, no matter who it is.”

The end result of Saturday’s affair with Mix was a unanimous decision for “The Spaniard.” Which should, at least for now, negate any idea of a rematch in the short term. Opponent “Patchy” Mix will need to plug some holes. In the meantime, Archuleta can look ahead to challenges like Sergio Pettis and Kyoji Horiguchi.

When it comes to Bellator’s former bantamweight champ, Horiguchi, Archuleta was especially enthused. “HORIGUCHI!!” he bellowed during Saturday’s post-fight press conference. “I’m still coming for you baby, where you at? I’m hope you’re ready, Horiguchi. I want that fight, baby! I want that RIZIN belt! Let’s go!”

Of course, the Japanese fighter is on the shelf for the time being. But he’s one of a number of options out there for Bellator’s newest champion.

Archuleta would love to defend his belt in Spain, although Bellator President Scott Coker pumped the brakes on that, at least in the short term, due to the pandemic. However, regardless of where he fights, Juan Archuleta is definitely ready to be a marked man.

“TJ Dillashaw and Duane Ludwig told me before the Patricio Pitbull fight told me that there’s a responsibility being a champion,” revealed Archuleta. “They’ve coached me through it, and I know what’s ahead, and I’m excited for the responsibility it takes to be a champion.” 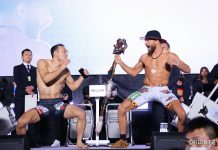 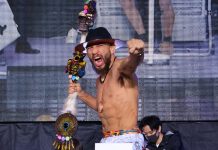