Tyrell Fortune had the unfortunate distinction of having his Bellator 245 fight come to an end due to an inadvertent low blow. In that, he was not alone on Friday — while Fortune’s fight with Jack May was ruled a No Contest following a knee that strayed south, the foul was soon overshadowed by a much more painful looking pair of spinning back kicks that landed low on Peter Stanonik, delivered by Raymond Daniels.

“I just want to fight. Of course I’m disappointed for a fight to end like that,” Fortune (8-1, 1NC) said following the bout, speaking at the post-fight press conference. “It’s not a win, it’s not a loss, but it’s just like a slip I guess. I don’t really know what you would call that, it’s just an accident.”

Fortune didn’t really want to touch on whether he felt May could have continued. “I’m not going to try to guess on how his nuts feel,” he said. “I’ve been hit in the nuts three times in a fight, and I continued to fight every single time, because I just wasn’t going to leave a fight like that.  That’s up to his discretion. I’m not going to judge what his body feels like.”

However, Fortune did feel like he was going to dominate his opponent as the fight wore on. “I was really looking forward to the second round, just controlling him, seeing what was going to happen.”

In any case, Fortune, who was looking to shake off the first loss of his career, is ready to get back to work. “Obviously I didn’t take any damage. I’m ready to fight.” 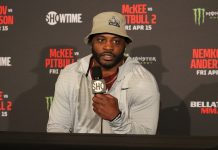 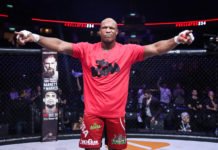