Ottman Azaitar improved to 13-0 with a blistering first-round stoppage against Khama Worthy in the co-main event of UFC Vegas 10.

A pair of promising lightweights clashed at UFC Vegas 10 with Ottman Azaitar battling Khama Worthy. Azaitar had come in undefeated at 12-0, but had not fought since a brutal knockout in his promotional debut just over a year ago. Of Azaitar’s 12 career wins, only one has gone the distance.

Worthy came in on a seven-fight win streak with finishes in five of those fights. Since signing with the UFC last year, Worthy scored two great wins with a knockout over Devonte Smith and a submission against Luis Pena.

About a minute when by before the first strike was thrown, and both men threw heavy shots. Azaitar unloaded with a huge overhand right followed by a short left, then smelled blood. He unloaded with constant shots and eventually Worthy had no choice but to go down. Azaitar got on Worthy’s back and delivered vicious haymakers to draw the stoppage.

It was his second fight in the Octagon and his first in just over a year. There was no ring rust here, as he looked just as good as he did in his debut. He said afterwards that he wanted to go three rounds, but he came up about 13 minutes short of that goal. He explained that once he sees the opportunity, he can’t help but go all out for the victory. 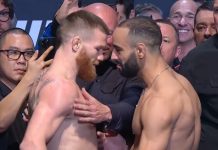 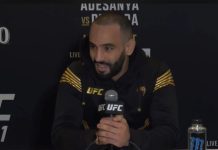