Alexander Romanov impressed in his promotional debut at UFC Vegas 10, utilizing heavy ground-and-pound to get a second-round submission against Roque Martinez.

It was a clash of heavyweights at UFC Vegas 10 as Alexander Romanov took on Roque Martinez. Romanov has had three opportunities to make his promotional debut this year, but all three fights fell through due to COVID-19. The most recent one was just last week against Marcos Rogerio de Lima. Romanov, who is Moldovan, was 11-0 with all of his wins coming by stoppage.

Martinez is a RIZIN veteran from Guam who had won three of his last four fights. He holds wins over Jerome LeBanner and Da Un Jung, and shared the ring with Mirko Cro Cop in RIZIN. He was making his UFC debut.

Roque Martinez started the fight with a few leg kicks, then ate a body kick from Alexander Romanov. Romanov dragged Martinez to the ground, then had to avoid a heel hook. Romanov got to his feet, then dropped some heavy punches on Martinez. Martinez scrambled to get back up, but Romanov hit a suplex and got back in top position. Romanov tried a scarf hold, but Martinez popped out, so Romanov slid into mount and started pounding away. Plenty of hammerfists were raining down, but Martinez’s guard held strong. Romanov moved to knee on belly and kept pounding away, but couldn’t get the finish. He tried a straight armbar at the very end of the round and Martinez grimaced his way to the bell.

Oh my! 😱 Someone check on the integrity of the Octagon! #UFCVegas10 pic.twitter.com/7fFMYZULcV

Martinez started the round with a right hand then a leg kick. Another body kick landed for Romanov then he drove in for a takedown right into half guard. Romanov was working on getting position rather than throwing leather, then eventually got mount. He elected to move to side control, then back to mount. He postured up and the hammerfists started flying again. Martinez held strong yet again, as Romanov stopped punching. Martinez nearly worked his way to his feet, but Romanov got right back to mount. This time, he went for an arm-triangle choke and forced the tap from Martinez. 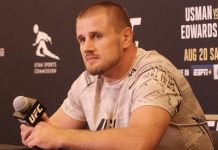 UFC 278’s Alexander Romanov: Fighters Who Don’t Think About Title “Have No Future in This Division”