Cat Zingano finally made her promotional debut at Bellator 245 on Friday night. It was a long time coming for the former UFC bantamweight title challenger, who last competed for her old promotion back in 2018. Zingano, now at featherweight, was no doubt itching to get back to work. But opponent Gabrielle Holloway missed weight for the fight, putting a new wrinkle on the bout.

In the end, the fight moved forward at a catchweight. There was little question that, after the coronavirus pandemic had delayed her debut, Zingano would press on. Bellator, meanwhile, had officially announced earlier on Friday that Cris Cyborg’s first title defense would come against Arlene Blencowe. Another factor for the winner of Zingano vs. Holloway would need to consider.

An early clinch Friday night in Uncasville, Connecticut led to a brief spell on the ground, with Zingano working off her back. That didn’t last, and back on the feet, “Alpha” Cat worked her opponent back to the cage, working in knees during a positional battle. Zingano looked for a sweep in an attempt to get Holloway down, then finally landed the takedown off a throw. That gave her a minute to work from side control, which took her to the end of the round.

Zingano opened the second with a couple of low kicks, while Holloway tried to stay light on her feet. Again, Cat went for a clinch and a takedown by the fence. Nearly giving up her back in a scramble, she managed to recover and get into guard. This time out, Zingano had far more time to work with. Zingano eventually worked from the back, with Holloway covering up and trying to get to the fence.

Early in the third, Zingano simply muscled Holloway to the canvas. From then she got right into guard, but Holloway used the fence to escape. The next time they hit the ground, it was Zingano on the bottom, with Holloway landing right in mount. That gave Gabby a chance to land some ground n’ pound, while Zingano held on, hands clasped. Holloway began dropping elbows, Zingano still hanging on. Just as things were getting real dicey, Zingano reversed, getting into half guard. Holloway worked her way free, eating a few knees for her efforts. Her time in mount likely won her the round, but Zingano finished in control, and had done enough to win the fight. 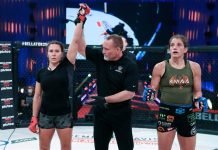 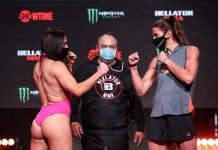