Bellator’s two women’s divisions are getting a big boost this weekend. In back-to-back shows in Uncasville, Connecticut, first Cat Zingano, then Liz Carmouche will be making their promotional debuts, at featherweight and flyweight, respectively.

Both are former title challengers in the UFC, Zingano at bantamweight, Carmouche at bantamweight and flyweight. Carmouche is actually the first woman in history to have stepped into the UFC octagon as a fighter, making the walk just prior to facing Ronda Rousey at UFC 157 in 2013.

Now, Carmouche (13-7), firmly established as a flyweight, embarks on the next stage of her career. Starting with Bellator 246 on Saturday night.

“This is my debut in Bellator, so I want to go out there and make a big boom,” she said during media day this week. “And then on top of that, having a platform like the Paramount Network to be able to do that, it’s just going to skyrocket what I believe to be the next chapter of my career, and get my name out there, and be able to do that with the Bellator banner.”

Fans were more than a little surprised to learn that Carmouche, whose last fight in the UFC had been for the 125lb title, had been released. The Girl-Rilla both was and wasn’t.

“In some ways shocked, in other ways not at all,” Carmouche told Cageside Press on Wednesday. “When the new ownership took over, there were just a lot of changes that were really weird to me. That just didn’t really make sense. People getting opportunities for fights that, a lot of people felt like they didn’t deserve it.”

Those decisions, added Carmouche, made it “really questionable for who was going to be able to stay in the organization.”

After her flyweight title fight with Valentina Shevchenko last August, Carmouche began asking for fights, telling the UFC she was ready. She appeared to be brushed off. Calls weren’t returned. Then there was the politics. “I had opportunities where I was injured, and I was told I had to take the fight, or I was blacklisted, and then other girls could say no to me at every opportunity and every turn.”

That simply wasn’t right, believes Carmouche. Still, Carmouche was unaware of her pending release right up until it happened. Carmouche was in Washington, D.C. the week of UFC on ESPN 7 last December. As a military vet, the promotion had her visiting hospitals, alongside the likes of fellow veteran Neil Magny. But word quickly sparked up in D.C., where the media had already assembled, and later online, that Carmouche had been released by the promotion.

“I was doing PR at a hospital when I got word,” revealed Carmouche. “But in another sense, it’s not really surprising, because the dynamics and the way the organization’s being run had changed a lot since I started with them.”

Things are much different in Bellator. Carmouche was instantly slotted in as a main event fighter, although the coronavirus pandemic has put that on hold for now. Instead, she’ll debut on the main card of Bellator 246 against DeAnna Bennett, a fellow UFC alum who appeared on The Ultimate Fighter.

Bennett told Cageside Press previously that she’s expecting a war in this fight. “I’m expecting the same,” said Carmouche. “It’s two veterans going in there. It’s not like she’s a slouch. This is not a hand-me fight by any means. This is another experienced veteran who has been fighting just as long as I have.”

Which should make for fireworks come Saturday night. 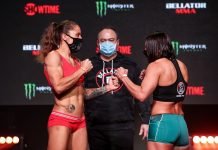