Phil Hawes made his first appearance on the Contender Series during the show’s inaugural season back in 2017. Hawes, who entered the bout with a 4-1 record, took on Julian Marquez in the featured fight for that night.

Hawes was able to take Marquez down and flatten him out midway through the first round, at one point taking his opponent’s back. Hawes showed great control in order to hold Julian down and land some impressive ground n’ pound late in the round.

However, Julian came out early in the second round with some vicious striking, hurting Hawes immediately and forcing a panic shot out of Hawes.

When Hawes was finally able to return to his feet, the effects of the wrestling was apparent on his striking, as it had slowed tremendously. After more grappling a very fatigued Hawes, in the process of returning to his feet, caught a nasty head kick rending him unconscious. Hawes was really dominating the fight until fatigue began to set in and Julian took over eventually controlling the fight by keeping most exchanges on the feet.

Phil’s Contender Series opponent back in 2017 was Julian Marquez. After Marquez impressed Dana with his finish of Phil, he was offered a UFC contract.

Since signing with the UFC Julian has looked really good. Marquez fought Darren Stewart in his debut bout and was able to finish the middleweight with a front choke in the second round.

Julian took on Alessio Di Chirico next in July of 2018 and though he came out on the losing side, he fought very well, forcing the judges to a split decision. Julian has been inactive since then and is looking to get back in action soon, but in his two UFC appearances, it is apparent that he belongs with the promotion.

Since Phil’s first Contender Series bout back in 2017 he has had 3 professional MMA bouts.  All 3 of these bouts have been wins for Hawes and he has finished each of his opponents as well.

It is important to note, however, that after the DWCs fight, Phill took close to two years off without competing in professional MMA.

When Phil came back, he faced Michael Wilcox, under the Bellator banner. Wilcox entered the bout with a record of 6-3. That fight was stopped by the cage-side doctor at the end of the first round due to a cut.

Just 5 months later Phil faced Dominik Schober who entered the bout with a record of 11-7. Hawes was able to submit his opponent in the very first round.

Earlier this year in January, Phil fought Yuri Fraga, who entered the bout with a record of 13-10-1. In what would be his final fight before his upcoming second DWCS appearance, Hawes managed to finish his opponent by TKO via punches in the first round.

For Phil Hawe’s second appearance on DWCS he will be taking on the 10-3 Khadzhimurat Bestaev. Bestaev is a huge man, standing at 6’6″, and usually fights at light heavyweight. Bestaev has faced UFC-level competition, losing to Alonzo Menifield back in 2017. All of Bestaev’s wins are by stoppage and he has never heard the final bell, win or lose. However, it is important to note that a lot of Bestaev’s past opponents had been making their pro debuts, only had a couple of fights, or had close to losing records. It will be important for Phil Hawes, in his second DWCS appearance, to use his wrestling and land effective strikes to finish the fight while on the ground, in order to avoid fatigue and a potentially dangerous standup striking battle. 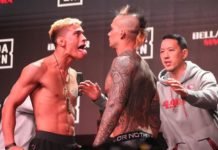 Nate Landwehr Out of UFC 253 Bout with Shane Young, Ludovit Klein In