UFC Vegas 9 was a card under siege on Saturday, losing multiple bouts and three fighters total the day of the event. That resulted in an abbreviated seven-fight card, with no official prelims when the event finally kicked off.

It didn’t seem to hurt the action any, as there really wasn’t a dull fight in the bunch. And with plenty of finishes, the UFC opted to reward four. Brian Kelleher, Michel Pereira, Ovince Saint Preux, and Andre Muniz all picked up Performance of the Night bonuses.

As a result, no Fight of the Night was awarded Saturday.

Arguably, Pereira’s fight with Zelim Imadaev might have qualified. Things got heated at Friday’s weigh-in, when Imadaev slapped Brazil’s “Demolidor.” So Pereira returned the favor during the fight, open-handed slapping Imadaev back, and adding a little dance for good measure.

It was only part of the fun for the flashy welterweight, who pushed off the cage into a superman punch, and executed his usual flashy, fan-friendly style with just a little more restraint than usual. That seemed to help his cardio a whole lot, and set up a late submission finish. While the ref’s call was controversial — a bit of a phantom tap to the rear-naked choke — Imadaev was going to lose the fight anyway. And Pereira certainly put on a heck of a show on the final fight of his deal. Look for him to be re-signed promptly.

A bantamweight fighting at featherweight, Brian Kelleher would have been forgiven for not even knowing who he was fighting at UFC Vegas 9. Kelleher went through three opponents in little over a week, the third being tapped the day of the fight with just hours to go before the event. With Kevin Natividad out, Ray Rodriguez got the nod. He didn’t last long, executing a poorly time takedown attempt right into Kelleher’s deadly guillotine choke.

Andre Muniz, meanwhile, took out Bartosz Fabinski with an arm-bar following some slick transitions on the ground. And Ovince Saint Preux used Alonzo Menifield’s momentum against him, catching the Contender Series alum coming in with a left hook that turned out the lights.

All four fighters pick up an extra $50,000 for their performances at UFC Vegas 9. 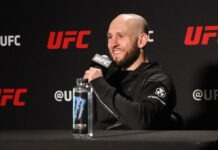 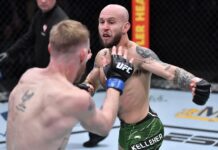 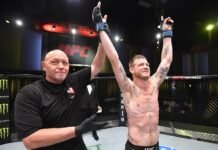