The only women’s fight on UFC Vegas 9 was an absolute war, with Viviane Araujo picking up the win over Montana De La Rosa.

The only ladies to grace the UFC Vegas 9 card were a pair of flyweights: Montana De La Rosa and Viviane Araujo. The pairing saw both fighters competing for the first time during the coronavirus pandemic, as De La Rosa had last competed in February, picking up a win over Mara Romero Borella.

Araujo, meanwhile, suffered her first defeat in the UFC back in December, against Jessica Eye.

The ladies opened up fast, with De La Rosa landing a few right hands in the opening seconds while Araujo was landing shots to the body as well as a few kicks downstairs. Araujo continued the attack to the body as well, landing a hard right hand to the body, before going upstairs with a hard right hand that landed clean. Araujo then landed another clean overhand right before De La Rosa went for a takedown that ended in a scramble with the two on their feet once again. Araujo landed another overhand right that resulted in De La Rosa’s nose bleeding badly. However, De La Rosa wasn’t deterred, staying in the line of fire before going for a takedown in the final minute that was stuffed. Araujo ended the round going for a takedown, however time ran out.

"Work from your heart!"@MontanaMarie211's corner giving some intense advice between rounds.

Araujo opened up fast once again in the second round, nearly buckling De La Rosa after a hard leg kick. De La Rosa soon began limping after eating another hard leg kick. She went to shoot for a takedown but was stuffed once again. De La Rosa began opening up halfway through the round, landing a few nice combinations including a clean head kick. Araujo walked right through the strikes, however, and continued winging right hands. De La Rosa found a home for the front kick, but it didn’t do much to slow Araujo down. Araujo landed a big combination near the end of the round, but De La Rosa landed three body kicks in succession to send the two women to round three.

Araujo went right back to the forward pressure in round three, however it was De La Rosa who was landing the better strikes early. De La Rosa landed a combination to get into the clinch, then landed three straight uppercuts in the clinch that landed clean before separating. De La Rosa began getting into a great rhythm and was making Araujo miss with the right hand, after it hadn’t missed at all early in the fight. Araujo began landing with her jab, however, and began snapping De La Rosa’s head back with it. De La Rosa went for a takedown in the final minute to hopefully steal the round, and Araujo did a great job of defending it. The two separated and ended the fight swinging.

Quite the war, something of a bloodbath, and a great showing by Viviane Araujo, who bounces back nicely from the loss to Eye. 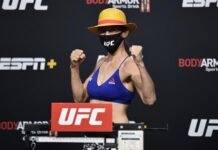