Alexa Grasso was set to make her flyweight debut in the UFC on Saturday night at UFC Vegas 8. And South Korea’s Ji Yeon Kim was the woman set to welcome her to the division.

It’s important to put that debut in context. Grasso had been considered as having star potential when she debuted in the UFC, in part because she represented a Mexican fighter at a time the UFC had few of them, especially in its women’s divisions. But weight struggles and inconsistencies in general dogged her, and a second miss at the scales earlier this year necessitated a move from strawweight up to 125lbs.

That came Saturday, against South Korea’s Kim, no easy out despite being on the shelf for a bit following surgery. Kim was certainly ready to throw some heavy punches early in the pair’s scrap, though Grasso was just as willing to return fire. Grasso mixed in some leg kicks, while Kim utilized her right hand, and targeted the body, in a first round that didn’t see any sign of a takedown. A close frame however.

Round two was once again predominantly a standup affair. Grasso was the more mobile fighter, circling and moving in-and-out, using her clear speed advantage. While Grasso was able to fire combinations set up by leg kicks, Kim was far too often throwing single strikes. The South Korean was soon pawing at her nose after incurring some damage in an exchange. Kim tried to pick up the pace late in the round, leading to a late clinch and a bit of a flurry, before they headed to the third.

It was Grasso who finally closed the distance in the third, briefly picking Kim up and pinning her back to the fence. But the Mexican fighter had to watch out for a guillotine, and never did complete the takedown. Instead, she went back at it on the feet, but Kim turned up the heat, walking her opponent down and landing some heavy blows that backed Grasso up to the cage. Kim needed an edge, frankly, but it was Grasso ending the round, and fight, on top thanks to a trip, dropping elbows — securing the win in her first trip to 125lbs in the UFC. 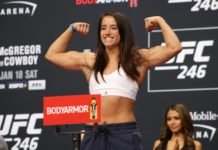