Uncasville, CT — It’s safe to say that Valentin Moldavsky has arrived in Bellator’s heavyweight division. At Bellator 244 on Friday, the Team Fedor heavyweight defeated Roy Nelson via unanimous decision. And while “Big Country” has been in a slump over the past couple of years, his name value still makes the win a standout for the 28-year old.

Moldavsky (10-1) entered the fight holding no expectations, about how it would unfold, or where a win might leave him in the heavyweight division, which currently has Ryan Bader as champion (Bader lost his light heavyweight title in the main event of Bellator 244).

“I really didn’t expect anything. I just expected to win, which I did,” he told media outlets including Cageside Press backstage Friday. “I was a little bit more cautious than usual, because he has a very unorthodox overhand right, and I obviously didn’t want to get caught with it. So I had to sacrifice the excitement of the fight in lieu of winning it, but I got it done.”

It’s a common refrain from Nelson’s opponents over the years. The key to beating “Big Country” is to play it safe, and avoid the right hand. When Jared Rosholt took the safe approach in 2016, it led to him being cut from the UFC. Still, the smart fight is to wear the big man down.

Moldavsky, asked later if he was surprised that Nelson remained a threat in the third round, said that “I felt like he was fading a little bit, but I didn’t want to risk it.” Hence not pushing for the finish at the end.

“I have a lot of respect for Roy, he’s been fighting for a long time. He’s fought a who’s who of the heavyweight division for the last decade,” Moldavsky noted. That said, the fight was no more special than any other, he added. “It was special because I won.”

So where does this leave a fighter undefeated in the Bellator cage? “I think five victories will probably get me closer to a title shot,” suggested Moldavsky. “That’s probably a question for Scott Coker as a promoter. But I think I’m getting close to it.” 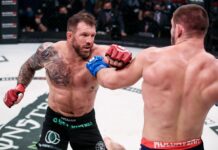 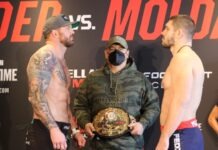 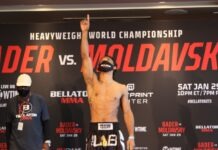