Featherweight action is set to be the latest addition to the UFC’s September 26 card. The event, which does not have an official designation set just yet, is anticipated to feature a bout between Nate Landwehr and Shane Young.

A source close to the situation confirmed the fight to Cageside Press, speaking on condition of anonymity as the UFC has not officially announced the fight. The card has been expected to take place in Las Vegas. However, the ongoing coronavirus situation means that could change.

Landwehr (14-3) entered the UFC earlier this year, only to be stopped via a knee from Herbert Burns back in January. “The Train” then rebounded nicely against Darren Elkins at UFC on ESPN 8 in Florida back in May. That fight saw Landwehr earn a unanimous decision over the UFC veteran.

For his third bout inside the octagon, Landwehr draws Shane Young. A native of New Zealand, Young (13-4) will enter the bout on a two-fight win streak, having picked up victories over Rolando Dy and Austin Arnett. Young’s only loss inside the octagon, in fact, came in 2017 against Alexander Volkanovski — who now reigns as the promotion’s featherweight champion.

Young, however, has not competed since February 2019. The 27-year old trains at City Kickboxing, the same gym that produced champs Volkanovski and Israel Adesanya.

The UFC’s September 26 date, while not officially announced, is expected to include the following bouts: 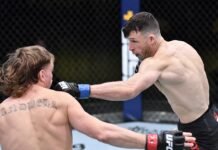 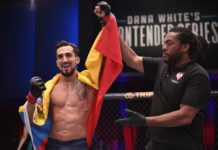 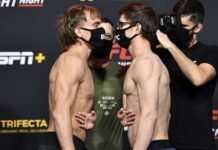