After nearly a month on Fight Island, the UFC is back at home, hitting the Apex residing in Las Vegas, Nevada on Saturday night. With Irene Aldana off the card, UFC Vegas 5 is topped by Edmen Shahbazyan versus Derek Brunson in an interesting rookie against veteran match-up. Lower down on the card Ray Borg was supposed to fight newcomer Nathan Maness. Borg would unfortunately pull out and Maness is now taking on fellow promotional newcomer Johnny Munoz Jr.

How will Maness fare in the UFC:

Even though he’s from Kentucky, Maness does have a few solid wins. Being quite well rounded he’s first and foremost a striker. He’s got some good boxing fundamentals using a good jab, nice bodywork, and throwing good combinations. Despite being a sharp striker he has problems biting on feints often and overreaching. The Kentuckian is a good clinch fighter using upper body control, not throwing much damage but more so controlling position.

Maness doesn’t use much in the way of wrestling but on the ground, he’s at least going to be a threat setting up chokes. Maness doesn’t really have a lot of output but he stays busy throwing even if he’s not as accurate. As the fight goes on his punches become more labored and it becomes easier for his opponents to read him. He frankly holds his chin a bit too high but has shown to be tough and can take a solid punch. It’s a good signing and you may see him trade wins and losses to start. Maness is going to be competitive with anyone he steps in the cage with.

How will Munoz fare in the UFC:

Munoz is a well-accomplished grappler earning a Brazilian jiu-jitsu black belt by the time he was 20-years-old. He comes with a list of accolades, including being a ten-time NABJJF Gold Medalist, Grapplers Quest Advanced Champion, and a three-time No-Gi World Champion/IBJJF (Blue, Purple, Brown).

In MMA Munoz has six submission victories as a professional. A lot of time with a BJJ ace their wrestling struggles in MMA. While that’s not fully the case with Munoz he’s not exactly where he should be at. Munoz does transition to the back standing well and is capable of dropping levels. Striking his way into the clinch of his opponents is a bit of a problem, as he doesn’t cut angles but rather just walks straight in.

Once on the mat, Munoz is extremely dangerous having finished fights via various methods such as ground and pound, heel hook, rear-naked choke, and an armbar. Munoz has seamless grappling easily transitioning and getting dominant . The Hawaiian is one-dimensional being solely a grappler with next to nothing on the feet. Munoz has a decent job but plodding movement and a low stance which means he’s easily hit. Munoz is always dangerous throughout the fight but has shown his gas tank isn’t all that deep. In my opinion, he should have gone the Contender Series route, as quality of competition is a concern, and he’s yet to be truly tested. If he was to improve in the striking department just a bit, however, he could evolve into a legit 135lb’er. Right now I see him more as a 50/50 fighter. Still a lot of talent with a somewhat high ceiling.

How they match up:

This a striker vs grappler fight. Maness hasn’t really been tested by a good wrestler but that’s not Munoz. Munoz reminds me of Jesse Arnett, a not-so-great wrestler with excellent grappling/submissions. Perhaps a tad better even. If Munoz somehow gets the fight down in the first I think he submits Maness. I don’t see that happening and the significant striking advantage of Maness is the clearest path to victory. Munoz also took this on extremely short notice. 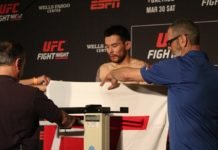 CFFC 83: If She Makes it to the UFC, Jasmine Jasudavicius’ Best Friend Must...