Aaron Pico continued to rebuild, Jay Jay Wilson lost the weigh-in battle but won the war, Jordan Mein had a rude welcome, and Sergio Pettis may have clinched a title shot. Those were the takeaways from Friday’s Bellator 242, which went down at the Mohegan Sun Arena in Uncasville, CT on Friday night.

The show was the first back for Bellator MMA since going on hiatus in the face of the deadly coronavirus pandemic. After taking several months to chart their course, the promotion returned with its “Fightsphere” — featuring extensive testing and isolation for all involved. End result, an event that went off seemingly without a hitch.

Unless you were on the losing end of things in your fight Friday night, of course.

In the main event, Sergio Pettis got the job done with a dominant showing against Ricky Bandejas. The former UFC flyweight standout has a new home in terms of both promotion and weight class. With two wins in 2020 in the Bellator cage it’s hard not to consider him a lock for a shot at Bellator’s vacant 135lb title.

Jordan Mein, the long-serving Canadian veteran and former UFC athlete, made his debut Friday at Bellator 242. Things did not go his way, as after two years off dealing with knee issues, Mein lost a decision to Jason Jackson.

Jay Jay Wilson lost at the scales on Thursday, coming in well over the featherweight limit for his fight with Tywan Claxton. But come Friday, he did enough to earn the win, at least on two judge’s scorecards. With opposing 30-27 scores, this one was scored all over the map.

Opening up the Bellator 242 main card was Aaron Pico, continuing to rebuild by earning his second straight finish victory. This time, Solo Hatley Jr was on the wrong end of a rear-naked choke — Pico’s first submission win.

Photo highlights from Bellator 242 can be found below! 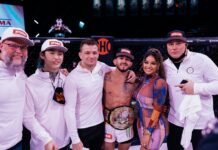 Bellator 272: Sergio Pettis Felt He Needed Adversity to “Come Out Here and Be a Dog” 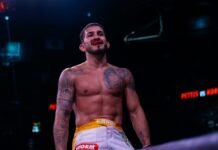