Tywan Claxton has long been a contender in the dangerous featherweight division. Formally his own head coach, Claxton decided to change some things up as coronavirus hit, which became a blessing in disguise for the contender.

“I spent the time throughout COVID seeing where I was going to lay my roots and I decided to do that Denver,” Claxton said during the Bellator 242 media day on Wednesday. After being stuck with fellow fighter A.J. Matthews in lockdown, “I grew a lot during the quarantine,” he added. “I think that it was kind of a blessing in disguise for me to be able to slow down, not be fighting as much, and grow as a fighter. It was all positive things.”

Kamaru Usman is a good friend of Claxton. The UFC champion is the one who convinced Claxton to train with a coach and team for his upcoming bouts. Elevation Fight Team in Denver, Colorado has become that new home.

“You don’t know enough to be your own coach, go join a team,” Claxton said regarding what Usman told him. So while heading to Vegas, Claxton went to Denver for a spell. “I ended up training at Elevation fight team for about a week, before I went back to Vegas. I got to Vegas, and then decided to turn around and go back to Colorado, and call that home. Got great partners to work out there with. It’s good to be able to walk into a gym and just be able to train.” Not to mention the great sparring partners.

As for Jay Wilson, Claxton isn’t to worried about the undefeated prospects world class jiu jitsu. Why isn’t Claxton worried? Well he believes he will be the one doing the damage while this fight is on the ground.

“He has never had anyone on top of him beating the sh*t out of him” Claxton explained. “That one is going to happen, I’ve been in there with Sanchez. If I take this fight to the ground there is nothing Jay Jay can do to stop me.”

Earlier in the day our own Joe McDonagh asked Jay Jay Wilson to rate the jiu jitsu of Tywan Claxton to which Wilson laughed and said it is impossible to rate. ‘It isn’t very good’ is what came next. Claxton was happy to respond when asked about this exchange.

“You wanna know what I am? I’m a White belt that’s about to whoop your a**” Claxton stated. “Rate my Jiu Jitsu, I’m a white belt, but a black belt in whooping a**. He can say what he wants to say, but again, there is levels.” Claxton added that he had the answer if, by chance, Wilson does take his back. “At the end of the day, the kid is biting off more than he can chew, and all he’s doing is pissing me off.”

Tywan Claxton is looking forward to talking to Wilson as he is using his dominant wrestling and vicious ground and pound. “I think I’m going to talk to him the whole time. I’m going to tell him that ‘a white belt’s doing this to you.'”

Claxton also praised A.J. Matthews, his training partner, for helping him in the preparation. 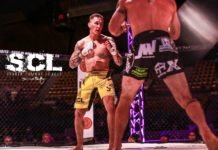