Legacy Fighting Alliance put on its second show of the month with LFA 85 on Friday night. Topped by a women’s strawweight title fight between Vanessa “Lil Monster” Demopoulos and Sam Hughes, the card offered a more complete line-up of fights in comparison to their first event back from the pandemic.

However, all did not go according to plan. Shortly before the event was expected to get underway, news broke that lightweight Chris Brown was off the card due to a positive COVID-19 test.

That left fans with a six fight card, which did not disappoint. Five of those six fights finished inside the distance, including the main event. That saw Demopoulos — who has made waves by continuing to work as a stripper, complete with writing The Stripper Bible while pursuing her fighting career — pull off a fourth-round inverted triangle choke to capture the title. In style. A technical submission, no less.

The UFC call-up could come soon for Demopoulos, who improved to 5-1 with the victory. Check below for full results from the event. 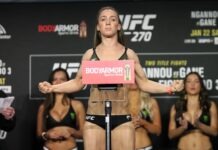 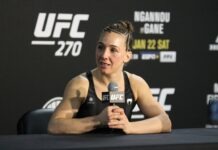