Modestas Bukauskas made his debut at UFC Fight Island 1, picking up a Performance of the Night bonus in his finish of Andreas Michailidis.

It was unquestionably an odd one, when all was said and done. At the end of the opening round, Bukauskas landed what appeared to be legal elbows to the head of his opponent. When Michailidis went back to his corner, scooting rather than walking, he appeared to lean on the door of the cage. Or try to. But since it had opened, he fell back.

The ref immediately waved off the fight.

🇱🇹 @ModestasBukaus1's elbows end the night as Michailidis fails to make it to the corner.

Bukauskas (11-2), a Lithuanian fighting out of the U.K., recapped the end of the fight with Cageside Press after the bout.

“I don’t know how long was left in that round. I just knew that I saw an opportunity to learn my strikes,” he explained. Prior to the fight, as happens at every event, the officials covered legal vs. illegal strikes with the fighters. “We went in, in the back and they sort of explained all the rules and stuff like that. And they said where the legal spots were. And I knew I was hitting legal spots, 100%. Even when you looked at the TV screen after, you saw those were in the right spot where I needed to be.”

Bukauskas, at that point, was ready to keep fighting. “I didn’t know what time it was in the round. I knew that if he would have been able to continue, he would have been good to go, we would have went to the second round,” he continued. “So that’s what I was expecting, because he sort of went down and he went up, and I don’t know what was going on. And then next thing you know, he just sort of falls over and then the referee waves it off.”

While he’s happy with the win, it’s not quite the ending he hoped for. “It’s a bit of a, I don’t know if you could call it an anticlimactic ending or something like that. Obviously, I would have liked it to be a bit of a cleaner finish, but at the same time, he wasn’t able to continue. So, you know, a finish is a finish.”

The whole experience of his first UFC fight, however, more than lived up to expectations.

“Oh yeah 100%. And more. I mean I visualize, obviously, walking out and stuff like that, but I never expected to be what it was,” Bukauskas said. “Walking onto that UFC canvas and stuff like that, Bruce Buffer calling out your name, seeing Dana White literally just sitting there. It’s just absolutely amazing, like the dream has now finally become reality.” 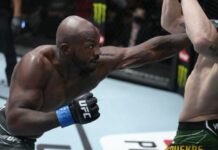 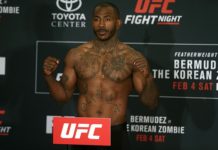 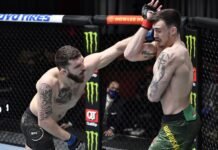