“The weight cut has been a lot easier. Everyone doubts me when I say that, but I can tell you it’s been a lot easier,” Jose Aldo said Wednesday. The former featherweight champion returns to the octagon at UFC 251 this weekend for a 135lb title shot, despite having suffered two straight losses.

One, mind you, came to current featherweight champ Alexander Volkanovski in a non-title affair. The other came in Aldo’s bantamweight debut, which ended in a split decision loss to Marlon Moraes.

That’s a fight many thought Aldo (28-6) won. Which is why he was dropped into a title shot against Henry Cejudo at 135lbs months ago. When the coronavirus pandemic hit, Aldo dropped out, and was replaced by Dominick Cruz. Cejudo won, and retired. Now, Aldo has his opportunity back, now paired up against Petr Yan for the vacant title.

Aldo is the underdog heading into the fight, but he doesn’t necessarily have an issue with that. “I don’t think so. [Yan]’s a young guy. He’s coming up in the division. People were questioning about my weight cut, so it’s understandable,” he said. But asked if he felt people were under-estimating him ahead of UFC 251, Aldo felt they were. “I would say so, due to my last fight. But I think they’re going to change their minds after this Saturday.”

If he manages that feat, he intends to be an active champ — something he struggled with, thanks to injuries, at 145lbs. “I want to defend the belt, maybe in October,” he suggested.

Aldo’s current title shot could do a lot for his legacy. That goes without saying. Even without a second title, the Brazilian sees himself as one of the greatest fighters to ever step in the cage.

“First of all, I’d put Georges St. Pierre first for how he dominated his division,” said Aldo, asked where he sees himself in the GOAT (Greatest of All Time) debate. “And then I would say either Anderson [Silva] or Jon Jones, then myself, then number four would again be either Anderson or Jon Jones.”

And where would a second title leave Aldo in the rankings? If he wins the bantamweight belt at UFC 251, might he be considered the greatest? “I don’t think so, I think there’s still a lot I need to do,” replied Aldo. “I still see that Georges St. Pierre would be ahead.” 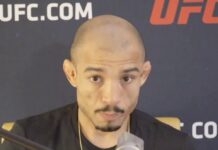