UFC Bantamweight is ready to return after his UFC Boston hometown victory.

Randy Costa is a name MMA fans around Massachusetts have known for a while. Training under the legendary Joe Lauzon, Costa (5-1) not only has the head-kick knockouts but the personality to boot. Now two fights into his UFC contract, Costa is ready to get back into the famed octagon to continue his winning ways.

“UFC has an opponent, we have begun talks,” Costa told Cageside Press recently. “I love the fight. It’ll be an exciting fight. I’m not going to say the opponent because I don’t want to jinx this at all.”

It isn’t surprising Costa isn’t looking to jinx anything. His UFC Columbus fight was called off due to the COVID-19 pandemic. That fight had Costa set to face Martin Day back in March. In these preliminary talks, the UFC is eyeing a late August, early September date for this bantamweight showdown.

Costa wasn’t entirely surprised that the Day fight fell through. “I went through a whole camp and I kind of knew it would be cancelled, had a feeling. Going through a whole camp didn’t bother me, I like getting my a** beat,” Costa laughed. Still, it was a lot of work for it not to pay off in the end. “The dieting, the weight cut — that’s a lot of hard work without the reward.”

One of the most important pieces of Costa’s career has been the photo he always carries with him, the photo of his late best friend, Devin Carrier. For those who have not seen Costa at weigh-ins, or post fight in the octagon, he always has a photo of his best friend. Even in his debut loss in the UFC, Brandon Davis held the photo post-fight.

“I swear to you, I never would have taken another fight if it wasn’t for Devin Carrier,” Costa told Cageside Press. “Before he passed away I gave him my word I’d continue. If he was still alive I wouldn’t be a fighter. This is all for him, everything I do in the UFC is for him. That photo will always be on me.”

Costa is absolutely making Carrier and his family proud in this process and will continue to do so as Costa continues to live his dream in the UFC. The Taunton, Mass. native has been training at American Top Team in Florida for this camp while Lauzon’s MMA is closed in Massachusetts.

“Everyone is super welcoming, I didn’t know if I’d be treated as an outsider to start, but super welcoming,” he told us. “I’m in a great spot right now with ATT. Actually did five rounds with [Bellator’s] Ricky Bandejas this morning.”

Costa is coming off of an impressive TKO victory over Boston Salmon at the TD Garden in January. Currently at 5-1, two fights into the UFC, the promising bantamweight is ready to  taste victory in the cage again. Catch the full interview in the link above. 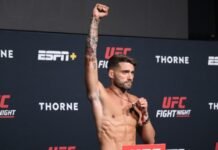 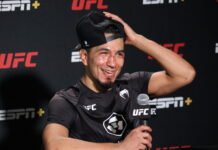 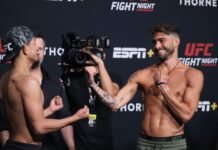