Khama Worthy made an emphatic statement against Luis Pena by making the highly-touted prospect tap out late in their featured preliminary bout.

The featured prelim fight at UFC on ESPN 12 featured two rising stars in the promotion. Or, at the very least, two fighters with the potential to be stars. Khama Worthy, alias “The Deathstar,” had shocked with a knockout of Devonte Smith on just four days’ notice in his last fight. Luis Pena, better known as Violent Bob Ross, had already achieved a decent level of stardom in the UFC — but he certainly had the potential to be even bigger.

It would require nothing more than a few more big performances really. And on Saturday, they had the platform for just that. Pena opened up the action with some jabs and leg kicks, and Worthy fired back with a strong body kick that landed flush. Worthy exploded forward with some nice attempts at counter strikes, but they were just blocked.

Pena was able to sneak in a left hand, but Worthy fired back with a body shot. An overhand right from Worthy found a home, as Worthy continued to stay planted in his stance, waiting for opportunities to strike. Pena dove in for a takedown but it was beautifully stuffed by Worthy. Another body kick landed for Worthy, but Pena was able to counter with a very nice left hand. The body kicks continued to add up for Worthy, who was able to land a right hand after one just before the round ended.

Round two began with leg kicks from Worthy as Pena pressed forward with his jab. Pena continued to attempt for a front kick, but couldn’t find a home for it. Then, Pena dove in for a takedown, getting it, right into side control. A quick transition from Pena and he established full mount. Pena immediately went for an arm-triangle choke but was unable to get it. Worthy scrambled but gave up his back. Pena locked in the body lock and unloaded some ground-and-pound from the back position, while also working for the rear-naked choke.

Worthy did an excellent job of defending the choke and limiting Pena’s ground-and-pound before flipping into top position in Pena’s full guard. Worthy was able to get to his feet, but Pena stuck to him and immediately got him to the ground again. Again, Pena transitioned into full mount, and quickly took Worthy’s back again. Worthy was able to flip into top full guard again as time expired in the round.

The third and final round kicked off with body kicks being exchanged by both men. Pena went for the takedown but was stuffed. Worthy snuck in a very nice right hand that he later followed up with a body shot. Pena landed a nice couple of body kicks of his own in response. A very nice 1-2 connected for Pena, who then had a takedown stuffed by Worthy. Pena attempted to clinch up, just avoided some shots from Worthy, and had a takedown stuffed against the cage. Worthy then locked in a standing guillotine with Pena up against him on the cage. Worthy then fell to his back, kept the choke locked in, giving Pena no choice but to tap out to the tight squeeze. 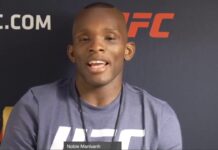