Vanessa Demopoulos, also known as Lil Monster, is one athlete very happy to see gyms in California back up and running. The fighter out of Ohio, who is also a published author and exotic dancer, is in the main event at LFA 85, with the promotion’s vacant strawweight title on the line.

Which means it’s time to get back to work, with fewer restrictions than the pandemic has allowed thus far.

“As soon as the pandemic happened, I had to really just completely reinvent the way that I train,” she told Cageside Press recently. “Because I didn’t have access to a gym. L.A. is probably one of the most strictest places when it came to the COVID. So all of my training had to happen inside, and solo.”

If you’re thinking of Rocky-style training montages, you might not be too far off. “I had to get really good with things like shadow boxing, working a bag, a lot of ground and pound stuff.” A lot of running as well, calisthenics, and “just making sure that my own mindset came first.”

Demopoulos only found out about the title opportunity a week ago. “I didn’t know about this in advance. This is something that just popped up.”

“We all found out at the same time,” she said of getting the news basically when the media did. “For me, I knew. I knew. I wasn’t not going to be ready. That’s who I am as a person. I actually love training. This isn’t a burden, for me to train. It’s not a burden for me to be in a fight camp. I’m always in fight camp. For me, I’m happy. I’m always training, and I’m always thinking about ‘what’s next? What’s next for myself?’ And I think that that’s why opportunities come through. Because when you want something, when you’re hungry and you’re ready, that’s when things come through.”

She’d been in contact with LFA, and had a feeling something on the horizon. Then it came: a title fight against Samantha Hughes, an undefeated fighter who turned pro last year.

Hughes was actually on the last card Demopoulos fought on, and has only competed as low as flyweight. She’ll make the drop to 115lbs for the first time against Lil Monster. “I know that for her, I think she’s fairly well rounded. She’s an MMA fighter, and she’s made it to 4-0. So congratulations, let’s go!”

With an upbeat personality and unique background, Demopoulos has been on the radar for a little bit now, as a fighter who could potentially make the UFC some day. A spot on the Contender Series has been suggested. Whatever comes next, Vanessa Demopoulos told us, she’s game. 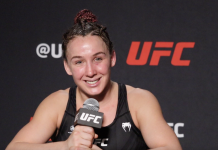