Zak Cummings will return to the octagon for the first time in almost a year this August. When he does, he’ll be met by Italy’s Alessio Di Chirico, also coming off something of an extended layoff.

Cummings had previously confirmed that he had fight news pending.

FIGHT NEWS SOON!!! Opponent backed out in Jan, April fell through with COVID-19, Nothing is stopping me in August! #ufc #victory #paycheck @ Las Vegas, Nevada https://t.co/5hFJTQfYm9

MMA Junkie was first to report the pairing. The August 29 card does not have an official location or name, nor any numbering. The UFC has not officially announced the event.

Cummings (23-7) last fought at UFC 242 on September 7, 2019. That fight ended in a unanimous decision loss to Omari Akhmedov. It also snapped a two-fight win streak for the American, who had picked up victories over Trevor Smith and Trevin Giles.

A member of The Ultimate Fighter 17, Cummings has been with the UFC since 2013. After competing the entirety of his UFC run at welterweight, he returned to the middleweight division, where he fought outside the UFC, in 2018, and has gone 2-1 since.

Di Chirico (12-4) will be looking to snap a two-fight skid when he faces off with Zak Cummings. The Italian fighter last competed at UFC Copenhagen, also in September 2019. He lost the fight on the judge’s scorecards, with Makhmud Muradov picking up the unanimous decision win.

Prior to that, Di Chirico had lost a decision to Kevin Holland. Overall, he’s 3-4 in the UFC.

The UFC’s August 29 card is also expected to feature a key light heavyweight bout in Aleksandar Rakic vs. Anthony Smith. 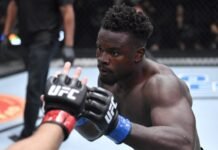