It was a rude welcome to the UFC for Max Rohskopf. The undefeated lightweight prospect made his debut on Saturday at UFC on ESPN 11, stepping in on short notice to replace Joe Solecki against Austin Hubbard.

For those with a sharp eye for prospects, the Las Vegas native had been on the radar the past year thanks to his dominant wrestling and undefeated record — with not a single fight going the distance, and just one leaving the first round.

Drawing Hubbard, however, gave Rohskopf a tough assignment for his debut. A former LFA lightweight champion, Hubbard had already made three trips to the octagon and had the clear edge in experience. That showed Saturday.

The fight started off with both men finding their range, feeling each other out with both landing leg kicks. Almost two minutes in Max took the back standing and eventually slammed Hubbard to the mat. He barely avoided a knee, however, and Hubbard got back up quickly. Rohskopf grabbed a leg of Hubbard and got the fight back down. Rohskopf worked for a while on the heel hook and then knee bar, switching between subs. But Hubbard escaped back to his feet. The last minute saw the fight standing with Hubbard throwing a knee up the middle and plus an uppercut to catch Rohskopf shooting. Hubbard did land a nice right hand in the last few seconds of the round.

Straight away in the second round, Rohskopf rushed forward on an Imanari roll. He then grabbed the single leg for the takedown. Max attacked with a front headlock but Hubbard did get back to his feet. Hubbard on the feet started to put it together piling on with kicks to the leg and body while landing his right hand. Hubbard kept throwing the knee up the middle having Max second guess a takedown. Max was tiring badly. Late in the second round Hubbard was beating his opponent up, just teeing off. Hubbard dug in hooks to the body to close the round.

In the corner going to round three Rohskopf told his coach he couldn’t continue. His corner, however, ignored their fighter’s pleas, telling him he could still go out and fall back on his wrestling. Ultimately, he didn’t have it in him, with Rohskopf telling the doctor and ref he couldn’t continue, in effect throwing in the towel. The fight was called, ruled a doctor’s stoppage.

A lot will be made of Rohskopf not answering the bell for the third. That said, he is a young fighter, taking the bout on 10 days notice, against a far more experienced opponent. In the end he lives to fight another day, and will hopefully get that chance. 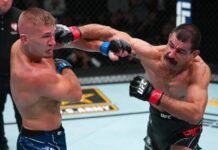 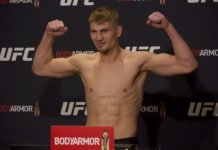