It will be card number four in Las Vegas for the UFC this weekend. UFC on ESPN 11 puts the focus on the heavyweights, as the #3 and #7 ranked big men throw down in the main event. That pair would be Curtis Blaydes and Alexander Volkov, respectively. In a fight that might lack star power, but that could be key for the heavyweight division.

Blaydes will be looking to make it four in a row, and cement his spot as a top contender. With Miocic vs. Cormier 3 finally on the horizon, a win for Blaydes would arguably leave him behind only Francis Ngannou as the next in line.

Volkov’s situation is a little murkier. Still, the Russian bounced back from a loss to Derrick Lewis by winning (a fight he frankly should have won) against Greg Hardy last year. Volkov was creeping up on a title shot prior to the Lewis win, and could at least be within striking distance if he defeats Blaydes.

Only one fighter came in heavy Friday: Frank Camacho. Last to hit the scale, Camacho was 158lbs for his lightweight fight against Justin Jaynes. Jaynes was stepping in as a short-notice replacement for Matt Frevola.

* Camacho came in 2lbs over the lightweight non-title fight limit 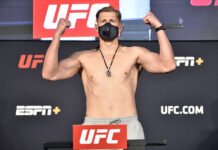