Max Rohskopf might not be a name UFC fans may recognize when looking at the fight card for Saturday night’s UFC on ESPN 11. Yet while Rohskopf may be a question mark for most fans, the Vegas native has earned the attention of the UFC brass with his undefeated record (5-0), and five finishes in the process. Stepping in on short notice this weekend, it may not be exactly how Rohskopf planned it, but nonetheless he has something to prove in his debut. And the added pressure won’t bother him as he prepares for Austin Hubbard.

Cageside Press caught up with Rohskopf ahead of his debut this weekend.

“I’ve got a lot of hype recently, that adds pressure but that is no different from my daily life, I’m hard on myself, but come fight day I have a lot of zen. I pride myself in that,” he told us.

“You never know what’ll happen on fight day. I’m fairly confident I won’t have nerves but we will see, it hasn’t happened yet,” Rohskopf told us. “All I know is I’m ready for everything on fight day and ready to show the world who I am.”

Rohskopf is a top tier wrestler. A collegiate level champion with North Carolina State in the ACC. He’s long been a wrestler before an MMA fighter, but grappling grabbed his attention. The 25 year old has four rear naked choke victories, and has proven that his ground game is an outstanding addition to his wrestling background.

“It’s no secret wrestling is what I’m best at, it is a huge part of the game plan, but if I see something I like I change the gameplan” Rohskopf stated. “Game plans are for people who aren’t good, you have to adapt in there, change things, find weaknesses and exploit them.”

Rohskopf is prepared to throw the ‘game plan’ out the window once in the octagon with Hubbard. While Rohskopf should have the wrestling advantage in this bout, Hubbard, a three-fight veteran of the UFC is believed to have the advantage on the feet by many. Although Hubbard (11-4-0) has only one TKO victory in his last seven fights. Of his four career losses, only one has been via submission.

“I might keep this standing, who knows. If I feel an advantage on the feet I might stay standing with him,” the Vegas native said. “I haven’t really had to stand with anyone thus far, it’s been easy for me to get takedowns, or opponents panic and take an easy way out. It’s all about finding a weakness in that cage.”

The former Titan FC competitor has trained for much of his young career out of Vegas’ own Xtreme Couture, a gym home to many promising UFC fighters, the likes of Boston Salmon, Dan Ige and more. Recently though Rohskopf has made his primary gym Zenith MMA, a gym he helped create with Robert Drysdale, his current coach.

“I was down in the dumps to be honest with you, feeling down about having nothing scheduled,” he admitted. “I got that call and it changed everything, I feel sharp, sharp as I ever have. I’m in with Bubba [Jenkins] everyday, in with my guys everyday.”

It’s clear the former collegiate champion is more than a wrestler, and has continued to train under some of the best to master the many skills of the mixed martial arts world. Asked what he had to say to fans tuning in this Saturday, Max Rohskopf said the following:

“I’m a guy that grew up with nothing, wasn’t an athlete growing up, worked my ass off to be where I’m at. I don’t want to just make it to the UFC, I’m not satisfied, I want to thrive in the UFC.”

Catch the undefeated Vegas native perform at home in his UFC debut against Austin Hubbard this Saturday June 20 on the preliminary card of UFC on ESPN 11. 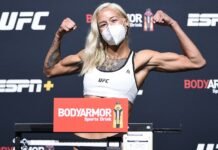 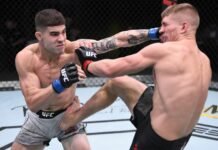