When the UFC returns to the Apex this weekend for its fourth straight Las Vegas card, it will be heavyweights taking center stage. The main event sees Curtis “Razor” Blaydes, the #3 ranked UFC heavyweight, facing Alexander “Drago” Volkov, who ranks 7th.

When Curtis Blaydes makes the walk to take on Alexander Volkov at UFC on ESPN 11, he will be looking to do more than just extend his win streak to four fights. Frankly, he will be looking to make a statement and insert himself into the title picture, despite having two losses to the number one contender, Francis Ngannou.

Not one to look past opponents, Blaydes is well aware of the challenge before him with the Russian striker Volkov. But it still doesn’t get in the way of him keeping a close eye on the heavyweight title picture, and while he has lost twice to Ngannou, he does believe should he get past Volkov, that things will be different the third time around. Looking as sharp as ever of late, Blaydes enters this fight extremely motivated, and dead set at earning a crack at the heavyweight championship.

How that comes about could get interesting. There’s a reason Blaydes has his eye on a third Ngannou fight, beyond simple revenge. With Stipe Miocic vs. Daniel Cormier 3 booked for August, there’s no telling where the title will be in a few months. Cormier is likely to retire, win or lose. Blaydes has suggested Miocic might do that same — and were that the case, it could leave the winner of Saturday’s fight on a collision course with “The Predator.”

Of course, there’s business to attend to first.

For more on Saturday’s main event, check out our video preview above. 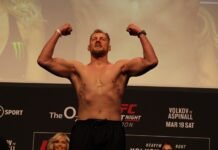