Promotional newcomer Zarrukh Adashev, a notable kickboxer from GLORY who had started making the switch to MMA with Bellator, made his debut Saturday at UFC on ESPN 10. The Las Vegas card had a handful of newcomers, and Adashev had drawn the much more experienced Tyson Nam.

He also missed weight for the bout at weigh-ins on Friday. The bout was expected to take place at bantamweight. Not that Adashev’s cardio had a chance to be tested Saturday night. What transpired, rather, was a very quick fight — the second straight to open the night.

Round one didn’t see much action until the finish happened in fact. Adashev landed an inside leg kick only to have Nam counter with a huge right hook on the jaw. The shot sent Adashev crashing to the mat, stunned. He was probably out cold then, but Nam launched what might have been an even more violent follow-up punch, as ref Herb Dean rushed in the make the save.

After going 0-2 to start his UFC run, Tyson Nam now has a highlight reel knockout to add to his resume. Post-fight, the idea of a drop back to flyweight was suggested. Nam, for his part, seems open to anything — including fighting again soon. 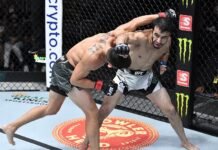 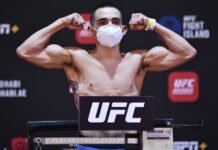