The UFC is coming back to the UFC APEX arena for the third straight week this weekend. This time, it’s for UFC on ESPN 10, being headlined by top flyweight contender Jessica Eye and division newcomer Cynthia Calvillo. Other notable fighters on the card are Marvin Vettori, Ray Borg, Andre Fili, to name just a few.

In a flyweight bout, Tyson Nam was originally supposed to fight Ryan Benoit. However Benoit pulled out for undisclosed reasons. The UFC reached out to Tim Elliott but he is still under suspension following his last fight. Now the UFC has secured the services of Zarrukh Adashev who will fight Nam at 135lbs.

How will Adashev fare in the UFC:

Zarrukh Adashev is basically what you expect to see in a 3-1 fighter — but to that point, he’s got tons of potential. While he is only 3-1 in MMA he has a bunch of combat experience, and is especially known for his time in Glory Kickboxing. In MMA, he’s competed for Bellator. Adashev is an Asian hand-to-hand Combat champion, a WKU kickboxing champion, plus other accomplishments with an overall 16-3 kickboxing record.

With his stand-up background it’s not shocking at all that Adashev has been forced to defend takedowns, and in his first fight, he was taken down and finished by rear-naked choke. He’s gone on to win his next three fights though and has shown much better takedown defense. Adashev is vulnerable to takedowns from the outside when they shoot opposed to in the clinch. He’s a small guy so trying to just bully him down with the body lock is a bad idea. Adashev is very strong and has powerful hips just hip tossing/judo throwing guys with ease. On the feet, Adashev will overwhelm you with constant pressure and throw a lot of tricky kicks while frequently switching stances. His boxing is just as good with his hands always throwing combinations going to the body and head and throwing from all kinds of angles. Just a very smart and technical display is what “The Lion” puts on.

Adashev has decent wrestling and his jiu-jitsu is still growing. He throws up a good armbar from off his back and even on top. At this point, I don’t think his jiu-jitsu is a smart idea right now just because he’s so green in that area and needs a lot of work. The only fight that he went the distance in, he was pretty tired in the third round and I think lost that round. This isn’t a bad signing but there are better options just because he only has four pro fights.

How does Adashev match up with Nam:

At times Tyson Nam will wrestle to mix it up but he tends to stay on the feet more. That’s where he is at his best — but that will fight right into the style of Adashev. Nam has power behind his hands but is a bit stiff early on and doesn’t really throw much output. On the feet, Adashev should just outwork Nam. Adashev is much more technical, a lot faster, and throws a lot more. Nam will have to wrestle but I don’t think he’s exactly the wrestler to take Adashev down. 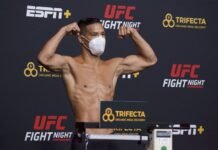 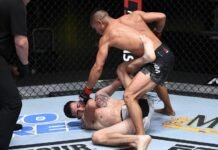 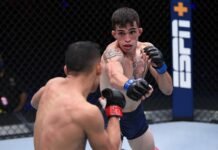 Welcome to the UFC: Jerome Rivera