A rematch between former UFC strawweight champions Rose Namajunas and Jessica Andrade is set for July 11 and is expected to take place on Fight Island.

Rose Namajunas (@rosenamajunas) vs. Jessica Andrade (@jessicammapro) has been agreed to for July 11. Dana White mentioned last week that was the plan, but said he needed to make sure Rose wanted to fight. I've confirmed now the 115-pound rematch is a go.

Per Brett Okamoto of ESPN, a rematch between former strawweight champions Rose Namajunas and Jessica Andrade is official for July 11.  The two were previously set to fight on April 18 and now their match-up will help to bolster what is expected to be the first card held on Fight Island.

“Thug” Rose Namajunas (8-4) is looking to get back in the win-column by avenging her loss to Jessica Andrade from May of last year.  Namajunas had dominated the first round of their match-up but was stopped in the second round via a slam from Andrade.  Prior to the bout, Namajunas had notched a win over Michelle Waterson and impressive back-to-back victories over longtime champion Joanna Jędrzejczyk.  Namajunas withdrew from the rematch on April 18 (prior to the cancellation of the entire event) after losing a family member due to COVID-19.

Jessica “Bate Estaca” Andrade (20-7) is looking to secure her first victory after losing the title to current champion Zhang Weili last August.  Prior to the loss, Andrade had been on a four fight win-streak against opponents Claudia Gadelha, Karolina Kowalkiewicz, Tecia Torres, and the aforementioned Namajunas whom she stopped in front of her home country of Brazil to win the title.  While Andrade had traveled to the United States for the cancelled April 18 bout, she returned to Brazil afterward which leads to the fight now taking place on Fight Island due to international travel restrictions in place due to the COVID-19 pandemic.

The fight carries major title implications for the UFC strawweight division as the winner will stand-out as a possible challenger for current champion Zhang Weili.  While Andrade remains a top contender in the division with a victory, Zhang has expressed her desire to face Namajunas next. 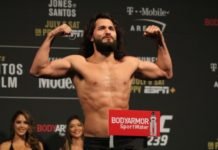