The UFC is gradually getting up and running again. And while travel restrictions brought about by the coronavirus pandemic — which has impacted millions globally — remain in place, it’s doing the best it can to fill out cards throughout the summer. With the latest addition being Eric Spicely vs. Markus Perez at an event yet to be officially announced on August 1.

MMA Junkie was first to report the booking. Spicely later confirmed the news on social media.

The middleweight pairing is the first booking revealed for the event, which does not have a location set. The UFC’s first events back, after a six week forced hiatus, took place in Jacksonville, Florida. This weekend, they return to Las Vegas, Nevada, hosting their first show at the UFC Apex, their own small arena/production facility.

The Apex is where Dana White’s Contender Series is filmed.

The promotion is also preparing Fight Island, a private island in locations unknown the UFC intends to use for international fighters unable to travel stateside. Perez fights out of Sao Paulo, Brazil.

Spicely (12-5) recently made his return to the octagon after a brief stint outside the UFC. In his first run with the promotion, from 2016 to 2018, Spicely went 2-4 with the company. He’d then move to CES MMA in New England, picking up a pair of wins under their banner. He returned against Deron Winn at UFC Greenville last June, losing a unanimous decision in a Fight of the Night.

Perez (12-3) has been with the UFC since 2017, alternating wins and losses. His last fight came in November, a loss to Wellington Turman at UFC Sao Paulo. 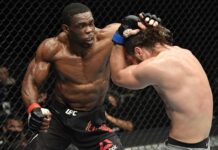