Fresh off a win over Hunter Azure earlier this month at UFC Jacksonville, Brian Kelleher is getting right back to work. “Boom” will be making a quick turnaround, fighting for the second time in less than a month when he meets Cody Stamann on June 6 at UFC 250.

BJPenn.com was first to report the news.

Kelleher (20-10) put together a modest two fight win streak with the victory over Contender Series alum Azure. Previously, he’d defeated another Contender Series product in Ode Osbourne at UFC 246. And while he called out Sean O’Malley following the bout, Stamann is a fine replacement. Even if he doesn’t play into the “Contender Series Killer” concept.

Stamann (18-2-1) was last seen at UFC on ESPN 7 in Washington, D.C. back in December. The Michigan native fought to a majority draw with China’s Song Yadong that night. An outcome that left him clearly rankled.

He’ll be looking for a more definitive outcome at UFC 250 — an event expected to be held behind closed doors at the UFC Apex in Las Vegas. The facility is owned and operated by the UFC, and began hosting Dana White’s Contender Series after it opened its doors last year.

The PPV date being hosted at the Apex is dependent on a Nevada Athletic Commission meeting later this week.

Brian Kelleher vs. Cody Stamann joins the UFC 250 card less than two weeks out from the event. The PPV is topped by a women’s featherweight fight featuring champ Amanda Nunes and challenger Felicia Spencer. 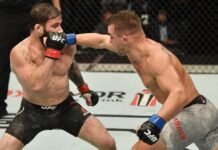 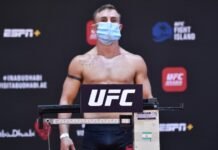