The UFC will be returning to Las Vegas on May 30 where their Fight Night featuring Tyron Woodley against Gilbert Burns will be head at the UFC Apex.

Per The Las Vegas Review Journal, the UFC will officially return to their home in Las Vegas on May 30 with the welterweight bout between former champion Tyron Woodley and Gilbert Burns being held at the UFC Apex.  The event marks the first event in Las Vegas since stay at home orders went into effect nationwide due to the COVID-19 pandemic and will be the first of what is expected to be many consecutive events held at the venue.

They've sounded off on social media; now they meet in the main event on May 30.

Last week, UFC President Dana White confirmed that the previously proposed May 23 event would be pushed back a week to May 30 and stated that the promotion was targeting a return to Las Vegas.  White had previously said that if the UFC could not return to Vegas for May 30, they would “100%” go forward in holding the event in Arizona.  In the past two weeks, the UFC successfully held three events in eight nights in Florida that included the UFC 249 pay-per-view event as well as two standard fight nights on ESPN+ and ESPN respectively.  Amidst the pandemic, the state of Florida had ruled that sports entertainment events such as the WWE were deemed essential business and were allowed to continue production without fans in attendance.  That decision made the state the frontrunner to host the UFC’s return, although White did say during the course of the week that there had been other states in play besides Florida.

The significance of the move comes from both a convenience and financial standpoint for the UFC.  For one, the UFC will essentially be working exclusively from their headquarters where they have full control over the facility as opposed to the labor of traveling to another state practicing social distancing as documented ahead of UFC 249.  As seen through the success of Dana White’s Contender Series, the UFC Apex has all the amenities to broadcast a complete event.  Financially, the Apex also provides the benefit of not costing the UFC anything to use the venue.  Depending on the arena, renting a venue for an event can cost anywhere from tens to hundreds of thousands to even the low millions for iconic venues such as Madison Square Garden.  As the UFC will be without fans, and thus without live gate revenue for the foreseeable future, the Apex will greatly lower the financial cost of hosting events.

Finally, as more facilities are allowed to reopen throughout the state, the Apex has the benefit of being located virtually next door to the UFC Performance Institute that provides a host of amenities for training and recovery for all UFC athletes.  With health and safety remaining a priority amidst the pandemic, having a facility that the promotion can sanitize and maintain will provide a huge benefit for all fighters and teams in attendance.

Per UFC President Dana White, the UFC Apex is expected to host events featuring fighters living in the United States for the foreseeable future.  With international travel being restricted, White is in the process of setting up the highly publicized Fight Island, a private island where he can hold events featuring fighters living outside of the US. 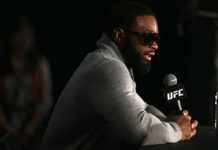