Cortney Casey pulled of an impressive, and bonus-winning, arm-bar submission at UFC on ESPN 8. Opponent Mara Romero Borella’s cry of pain let you knew that arm-bar was in good and tight.

It was the first finish for Casey since 2016, coincidentally an arm-bar which led to a verbal submission from Randa Markos. And while it’s not exactly a go-to move for her, Casey told Cageside Press post-fight during a virtual media scrum, “they give it to you, I’m taking it. Whether it’s arm-bar, triangle, omoplata, maybe get twister in there here and there. I don’t know. But they give it to me, I’m taking it. She gave it to me.”

The win came in Casey’s flyweight debut inside the octagon. Asked how much of an actual weight difference there was between her final weight stepping into the cage Saturday, and her weight when she fights at strawweight, Casey suggested the difference was slim.

“Probably not that much to be honest with you. Maybe five pounds, maybe six pounds,” she revealed. “Really not that much considering.” Casey simply puts more weight back on when making the cut to 115, she added.

Casey wore a Fighting for Aniah shirt to the octagon on Saturday, showing support for Walt Harris, and slain step-daughter Aniah Blanchard. The support from a fellow fighter may actually have been extra important, given the lack of fans in Jacksonville.

“To be honest, I fell on a few cards with Walt. I know him pretty well. I mean, not that we’re friends or anything like that, as far as like, we go to barbecues and stuff together, but I know him as a fighter and I know him as an athlete, and a competitor,” Casey explained. “I just want to show as much support as I could. If there was fans here, you know, there would be Aniah shirts everywhere, which there should be but unfortunately, it’s not possible tonight.”

As for when Casey might return, “I just need a week with my family, my friends. I want to celebrate my birthday and Mother’s Day. And, man, I’ll be back in there as soon as I can,” she finished. 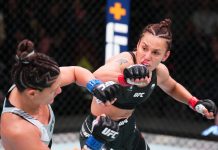 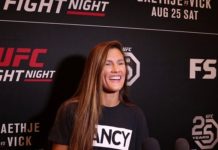