Sherman, the UFC’s former GIF king, exited the promotion a couple of years back. A brief stint in bare knuckle boxing followed, and he went as far as winning a belt for the fledgling BKFC.

At UFC Jacksonville, Sherman (15-6) returned, welcoming newcomer and longtime regional veteran Ike Villanueva. The performance that ensued looked like an evolution, if not a revolution, of Sherman’s game. He mixed up his strikes, ripped the body, threw in a number of highly effective leg kicks, and put Villanueva away via TKO in the second. A finish set up by a nasty elbow.

“I just, I went out there and tried to stay calm and poised and do the things I knew that I’m capable of doing,” he told Cageside Press when asked for his thoughts on the performance. “Do the things that I’ve always wanted to do and just never pulled the trigger on, and just try to live in the moment and not really think about the outcome.”

Asked what he credits for a clearly improved game, “I’ll tell you what, it definitely wasn’t the extensive camp that I had, because I took the fight six days ago,” he quipped. “And all the gyms have been shut down for two months. That was the first time I put my hands on anybody in two months.”

Instead, Sherman gave credit to his stint in boxing, the bare knuckle variety. “I really think it’s just because I’ve just changed my game, and a lot of it is credit to my little stint with bare knuckle boxing too,” he suggested. “I really kind of dove off into that realm of boxing, and and with that it wasn’t necessarily just the boxing, because you know you have big gloves on when you’re boxing. There you just have your bare hands. So really keying on being accurate with your punches, and picking the right shots. So that really helped me with some of the things that did tonight.”

There was another factor as well, and Villanueva’s leg displayed plenty of evidence thereof. “And then obviously bringing back the low kick off. People don’t talk about it. But I’m here to make sure they do talk about it from now on. I feel like I have one of the best low kicks in the game, by far.”

That’s something Sherman promised that observers will be seeing more of.

There’s a lot going on in the world at the moment, obviously. Currently employed as a firefighter, Sherman perhaps has a different understanding of it than better. But Sherman said simply that it comes with the territory.

“You know, it’s just part of my job. That’s what I signed up for,” he told us. “You know, it’s just, I just go and look at it like it’s an everyday thing and everyday job.” That said, he admitted that “it’s been strange times. I will put it that way.” 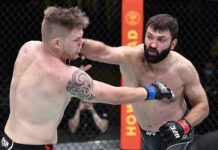