The 42-year-old known as “The Boa Constrictor” is a veteran of over 70 professional fights, but defeating former UFC heavyweight champion Fabricio Werdum certainly has to be up there.

For those who have lost track — with that many fights, it’s easy to — Oleinik has fought Mirko Filipovic, Alistair Overeem, Mark Hunt, and now Fabricio Werdum among many, many others. “[Werdum] is one of the biggest names in the mixed martial arts for last 10 years in my opinion. This is a very strong guy. He’s a very, very big name. And, of course I’m very happy to take this win tonight.”

Oleinik and his team prepared for a striking battle, clearly aware that the pair’s grappling expertise might cancel each other out. That’s exactly what seemed to happen, with the end result being Werdum coming under heavy fire in the opening round. With superior cardio, Oleinik came out with a split decision win.

Later, he’d expand on the topic by outlining some of the attacks he attempted. “You see I do back fist, I try doing push kick,” said Oleinik, who also noted that he tried out some low kicks. New twists from an old veteran.

A win over Werdum puts Aleksei Oleinik on a two-fight win streak. He wasn’t about to call out any names Saturday, but did note that what mattered was how big the name is. “That’s more important for me. You can fight ten times with no-names, and nobody knows you. But you can fight one or two times with big big names, and the whole world remembers you.”

For a timeframe, Oleinik said he was looking at a month or two before starting preparation for his next fight. At 42, you’d think he’d only have so many left. But who knows. With a laugh, Oleinik suggested he has “maybe seven, ten more years [left], thank you.” 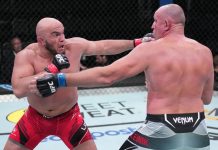