“Smilin'” Sam Alvey (33-13) is preparing to step back into the octagon and “restart the world’s economy” when he faces Ryan Spann at UFC 249 on May 9 in Jacksonville, Florida.

The Team Quest standout fighter spoke to Cageside Press/Between Rounds Radio recently about his mindset heading into this fight, and the match-up with the upstart, Spann.

“He’s a super athlete. He’s one of those athletes that probably could have played another sport if he wanted to, but he chose MMA,” said Alvey, who called Spann “the new breed of athlete that’s coming.”

While Alvey is expecting a tough fight as a result, “at the end of the day I know that I am going to be the toughest opponent he has ever fought. I know he has never fought near my skillset, and I have fought guys as good and better than him before. I am just looking forward to getting in there and showing off, hopefully we walk away with 50K each.”

The scrappy “Smilin” Sam Alvey is extremely happy to be the first fight of the night on the very card that is reintroducing sports to the world during this unprecedented pandemic. Alvey feels no pressure heading into UFC 249, and expects a 3rd round submission victory and the 34th win of his professional career.

Alvey has lost his last three fights and the thought of being cut from the world’s biggest promotion is a very real thing, but Sam is staying positive as he prepares for Ryan Spann. “I am perfectly aware that if I lose this fight I get cut but I don’t feel the pressure. I feel so good, so confident, so aware of my skilset, the pressure hasn’t set in. I just know I am going to win, I know it’s going to be a hell of a fight, I know he is an outstanding opponent and I know he is going to lose,” he stated. “My back is against the wall and I am going to step up and do what I do best and that is fight.”

With the Covid-19 pandemic lasting as long as it has, the possibility of something happening and cancelling this event is a very real concern. Alvey still feels very confident the fights will happen and applauds the UFC for doing what they have during these trying times. “Thank God for the UFC. The UFC has stayed strong and stayed safe and is doing everything as right as can be done. I hope they lead by example, I hope we show the world how safe we can be while trying to be.”

Sam also discussed his overall thoughts on the pandemic and what it has done to the economy, his social media “corona monster” videos, and picked the winners of the two title fights at UFC 249. Check the full interview below for that and more! 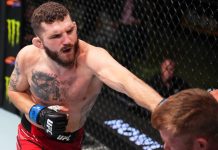 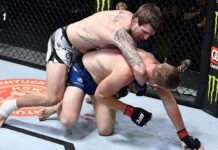