MMA has virtually been put on hold because of the coronavirus pandemic that has spread across the globe. It’s looking like this virus could potentially put MMA on hold the shelf for the better portion of 2020. With that being said we would like to look a little bit into the future and talk about fighters that could possibly be fighting for a UFC title in 2021.

Geoff Neal has made a huge splash since jumping into the UFC. He’s gone on a five-fight winning streak, finishing all but one of those fights. He most recently holds TKO wins over Niko Price and Mike Perry. Neal is currently sitting at number 12 in the UFC welterweight rankings. Since he is on a five-fight win streak he should be fighting someone inside the top ten next. Neal is an exciting knockout artist, with eight of his thirteen wins coming by TKO or knockout. His finishing ability makes him extremely marketable, something the welterweight division desperately needs with wrestlers like Kamaru Usman and Colby Covington at the top of the weight class. It could take some time but we wouldn’t be surprised if Neal earned a title shot by late 2021.

Arnold Allen is 16-1 as a professional MMA fighter. He is currently on a nine-fight winning streak, and is 7-0 inside the UFC. His most notable UFC victories are against Nik Lentz and Gilbert Melendez. Allen is currently ranked number 12 in the UFC’s featherweight division. His one professional loss was via decision back in 2014. Allen is tough as nails and should be able to get a fight with someone inside the top ten next. Being in the title contention by the end of 2021 is extremely likely.

Kevin Holland is the biggest longshot on our list. He currently is not in the top 15 and is coming off a loss to Brendan Allen in October of 2019. Holland’s upside is that he stays ready to fight. He has stepped in on short notice on several occasions against high-level opponents. His experience at such a young age also gives him a slight boost over his fellow newcomers. In his 21 fight pro career, he has fought some really tough opponents such as Thiago Santos, Geoff Neal, Curtis Millender, Rafael Lovato Jr, and Gerald Meerschaert. Although he is only 3-2 in the UFC, his ability to step in on short notice could make him a big possibility to make a big jump in the rankings in 2021. If that happens, he’s the type to jump at a chance to fill/save a card with gold on the line.

Who do you think deserves a title shot in 2021? Let us know in the comments down below. 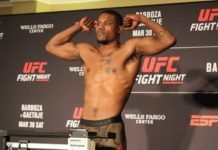