Canadians Randa Markos and John Makdessi made the trip to Brazil for UFC Brasilia this past weekend. It didn’t end well inside the octagon for either fighter: both the ‘Quiet Storm’ and ‘The Bull’ suffered decision defeats in what could very well be the last UFC event for a while, thanks to the ongoing coronavirus pandemic.

Markos announced the news on social media, while Makdessi’s story was carried by the Canadian Press. Canada is currently requiring all returning citizens to self-isolate for 14 days to combat the spread of the virus.

What’s concerning, however, is the lack of coronavirus testing available — and the lack of access to medical treatment for two athletes recently involved in a very physical competition.

“Just made it home. Stopped by the coronavirus testing center and they wouldn’t test me,” Markos wrote on Twitter. “Long flights with a lot of people, not feeling great and I’m not a risk? Okay I guess I’ll be home for two weeks.”

Markos noted in a separate post that her trip to Brazil was cut short, with the UFC attempting to rush her home prior to a travel ban came into affect. Currently, Canada has barred all international travelers, excluding Canadian citizens, permanent residents, Americans, flight crews, diplomats, and a handful of other exceptions.

Makdessi’s case is more complicated, at least on the surface, as the Montreal-based fighter is in need of medical attention — and can’t get it.

“I’m under (self) quarantine right now — 14 days,” Makdessi was quoted as saying (transcription via the Toronto Star). “And I need to get some medical assistance (as a result of the fight). I can’t even do that.

Makdessi also noted that he can’t attend the UFC Performance Institute in Las Vegas due to travel restrictions (even if he could, Dana White has ordered all UFC facilities closed until at least March 31).

He described the feeling of entering the fight against Trinaldo without even knowing if the card would go ahead as “very weird.”

“Everybody was kind of like not sure about what was going on. Mentally it was a scary feeling — not knowing what was going on,” he said. “Plus with the coronavirus and then my family back home. A lot of things were going through my head.”

The UFC had a number of detractors among media and fans calling on them to cancel the UFC Brasilia event entirely, especially as fighters were not tested for coronavirus. Just as many pushed for the event to go forward, given it was the only major sporting event on the planet. Ultimately the promotion held the card behind closed doors, minus fans.

The next three cards scheduled — UFC London, UFC Columbus, and UFC Portland — have all been postponed in the face of the pandemic. UFC 249, which Dana White vows will move forward, is on the bubble meanwhile. 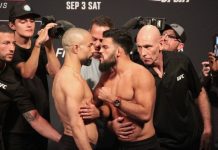 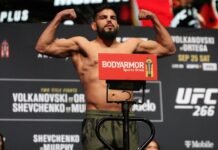