Surging UFC welterweight Anthony Rocco Martin steps back into the octagon on April 25, when he faces David Zawada in Lincoln, Nebraska on ESPN+. The UFC Lincoln card has Martin entering off a unanimous decision victory over Ramazan Emeev, in enemy territory in Moscow last year.

Overall, Martin is 5-1 in his last six fights. That, in one of the promotion’s deepest divisions.

With the world on lockdown because of the coronavirus, Rocco (17-5) is making the necessary adjustments to ensure he stays healthy. “We are trying to keep a good small crew together, stay healthy obviously, and make sure our families are healthy,” he told Cageside Press recently. “But we have some big fights coming up. The one thing I worry about is that for the next thirty days they have shut down flights from Europe and my opponent is from Germany, so hopefully he’s able to get over here.”

Martin is coming off that huge win over Ramazan Emmev in November when the American went into hostile territory and got a huge win. Asked about his gameplan and overall thoughts on the fight, Martin replied “I pretty much go into every fight with the same gameplan where I’m gonna be on my feet, get the jab going and these leg kicks have really been working for me. I’m gonna stick with that for awhile and try and line up my right hand and if they’re not gonna stop the first line of my offense, why would I change? I think I won all three rounds.” As Martin pointed out, few fighters were really willing to take the risk he took with that fight.

“I mean, nobody wanted to go to Russia to fight Ramazan, he was 3-0 and a tough gritty fighter.” Martin really thought that win would get him a top 15 opponent next, and was disappointed when discussing the fact that the UFC wanted him to fight Zawada. “I really thought, I anticipated after that win I’d get a much bigger fight, a bigger opponent then Zawada but I can only control what I can control.”

In Martin’s post-fight interview he made the whole MMA world tear up [including myself] when dedicating the win to his mother, who was recently diagnosed with stage four breast cancer. Rocco explained how grave the diagnosis was, and unfortunately the diagnosis is terminal.

In the meantime, Martin stays training hard with a heavy heart next to his ATT Atlanta teammates. Rocco even lifted up his shirt to reveal that he has put on almost 15 pounds of muscle recently. “I have never weighed over 182 and I’m 194 now, for the first time ever I’m going to have to start dieting,” he said. “Whatever the UFC PI has me on, I’ll tell you right now— I’m a real 170 pound fighter now. These guys are in a lot of trouble.”

Rocco also responded to some comments his opponent made in a previous interview. “David Zawada is delusional, I watched one of the podcasts he did and he was trying to tell people he can beat me everywhere, and I was like, ‘this guy is crazy man.’”

As far as the fight goes, Rocco believes he will dominate the German. “He can’t beat me anywhere. When he says he can beat me anywhere he’s highly delusional but the one skillset he has that can’t be taught is he has no quit in him.” Having said that Martin added that “he has openings. He claims to be a striker but he got pieced up from Khabib’s cousin who is a grappler. I’m gonna win this fight anyway I want and in the first round.” 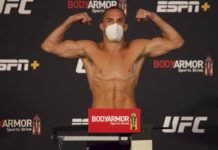